How to Knit a Gusset Heel

Once the leg is complete, you knit the heel. It may look complicated, but only a few simple steps are involved. To shape the sock so that it fits around the curve of the foot, the gusset heel consists of three steps—knitting a heel flap, shaping the bottom of the heel, and decreasing for the gusset. The example sock contains 64 cast-on stitches. 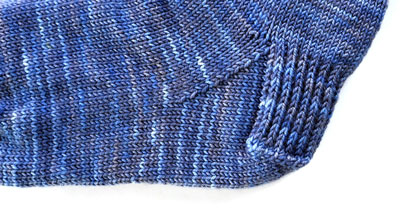 The heel flap is typically knit on half the total number of sock stitches and in a slipped-stitch pattern for thickness and durability. You knit it back and forth (not in the round) to produce a flap for the back of the heel.

Turning the heel involves the use of short rows to shape the “cup” at the bottom of the heel. Short rows are rows where you only work part of the stitches in the row, leaving some stitches to be worked later.

The gusset consists of two parts: picking up stitches to connect the heel flap with the rest of the sock and working decreases to shape the sides of the foot.