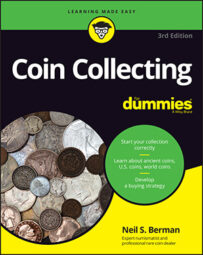 Explore Book Buy On Amazon
Throughout the years, people all around the world have experimented with a variety of items to denote value. The natives of Papua New Guinea valued the dried carcasses of the bird of paradise. The early Chinese created copper money in the shape of knives. Native Americans made and used wampum (clam shells, handmade into beads, polished, drilled, and strung on strands of leather) as a medium of exchange. All sorts of innovative methods have been used to facilitate trading, but none of them became so convenient and important as those little round pieces of metal we call coins.

Gold and silver formed the basis for most great civilizations' systems of money. Greece, Rome, Egypt, Spain, England, the United States, and other countries all based their monetary systems on gold and silver at one time or another.

In the 1930s, numerous proposals for commemorative coins appeared before the U.S. Congress. Although many of the coinage bills had narrow appeal, they became law, and the U.S. Mint dutifully struck the coins, which were then sold through distributors who added a premium above the face value of the coins. The collecting public paid the premium for the coins and happily added them to their collections.

But before long, collectors rightly complained of too many different coins and argued that speculators were manipulating the markets and prices. The U.S. Mint got the hint, the flood of commemoratives slowed to a trickle, and collectors were happy again. Nevertheless, many new people were attracted to coin collecting by the beautiful commemorative coins, just as they are by today's commemorative coins.

In the late 1950s and early 1960s, collectors went nuts for BU rolls: original, bank-wrapped rolls of Brilliant Uncirculated coins. Collectors tried to obtain rolls of as many different dates, denominations, and mintmarks as they could. Certain issues, like the 1950-D nickel, were promoted as being rare, and prices shot up. The public eventually realized that coins with mintages in the millions were not rare and would never be. Today, the BU 1950-D nickel roll remains cheaper than it was 35 years ago, and new collectors can't understand why BU penny rolls from the 1950s are so inexpensive. Like all good fads, the BU roll craze created lots of new collectors.

Silver popped up again in the early 1970s when 1-ounce silver art bars became the rage. Art bars are thin, rectangular silver bars with polished surfaces and designs that commemorate just about everything imaginable — weddings, a new year, Thanksgiving, cats, you name it. Mintages were limited, unusual varieties appeared, and some rather deliberate errors showed up. In short, a flood of art bars overwhelmed the market and quickly killed it. However, while it was alive, the art bar craze introduced thousands of people to coin collecting, many of whom stayed.

Neil S. Berman is an expert numismatist and professional rare coin dealer with over 50 years’ experience. He’s been published in Barron’s, Trust and Estates, National Law Journal, The Financial Planner, Pension World, and Executive Jeweler. He has appraised coins for the United States Postal Service, the Federal Deposit Insurance Corporation, and the Securities and Exchange Commission.