Because trading is a business of probabilities, it’s important to have an advantage over other traders, usually in the form of you seeing something they don’t see. This type of advantage is an “invisible edge.”

Volume is closely related to trend because for the market to make a strong sustained move in one direction, it requires a lot of trading activity in terms of shares, lots, and contracts (volume). So if the market moves up but then a dramatic amount of shares start selling against that move, the market will have a difficult time following through to the upside.

Seeing volume patterns that others don’t see is the best advantage you can enjoy.

Going up with the buying volume index

One volume index tracks the amount of up volume or buying volume of the various markets (most notably the NYSE and the NASDAQ). You can plot the up volume on your chart by simply plotting its symbol on your chart as you would any stock symbol.

This index isn’t an indicator as such, so don’t look for it in your indicators list (a common misunderstanding among traders). The symbol for this index can vary from one data provider to another, so request the symbol for up volume from the company that provides data for your charts.

A common symbol for the NYSE up volume is $UVOL, and for the NASDAQ up volume, it’s $UVOLQ, but yours may be different.

The dollar sign at the beginning of such symbols indicates that it’s an index. Your data provider may use another symbol, such as ^.

Coming down with the selling volume index

Focusing on the difference between the up/down volume indexes

If your charting software doesn’t have such an indicator, check the forums for your software to see whether anyone has created one, or ask someone to do so for you. It’s an easy indicator to create, and you’ll find that most forums have programmers who create and give away indicators freely.

Volume is a primary driver of market direction and strength. Keep the following in mind when looking at the up/down volume difference:

The figure shows an example of how the broad NYSE market up/down volume started the day rather neutral (hovering slightly above the 0 level) and then began trending down. Seeing this downtrend begin, favor short trades only in whatever individual stock you are trading in the NYSE. 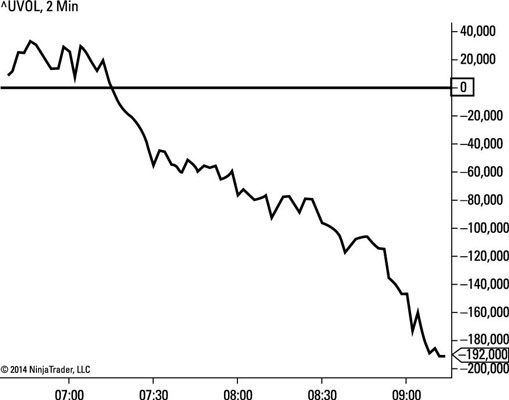