Trade with the Trend for Confirmation before Entering the Market

It’s often said that trend trading gets in “late to the party” because trend is a lagging indicator. That statement definitely holds some truth. Amateurs often hear the term lagging indicator and run for the hills as though it’s an obscene term.

The bottom line is this: Lagging indicators are lagging because they take more time to provide a signal. During that time, they’re accumulating data that they’ll (eventually) use to give a signal. Because they calculate more information before giving a signal, they tend to be more accurate than so-called leading indicators, which often give signals based on less data crunching (and therefore are less accurate).

A potentially leading indicator is momentum. It’s notoriously difficult to determine where a market will top out before falling significantly or bottom out before rising significantly. In other words, it’s extremely challenging to call where exactly an up- or downtrend will end and a new trend in the opposite direction will begin.

Using a lagging indicator (whether an actual mathematical indicator formula or a price pattern) provides more information for you to use to determine a trend change. It supplies you with some confirmation of that change instead of simply trying to guess which high will be the final high in an uptrend.

The figure shows a high in an uptrend. Do you think this is the final high before the trend reverses? How would you know? 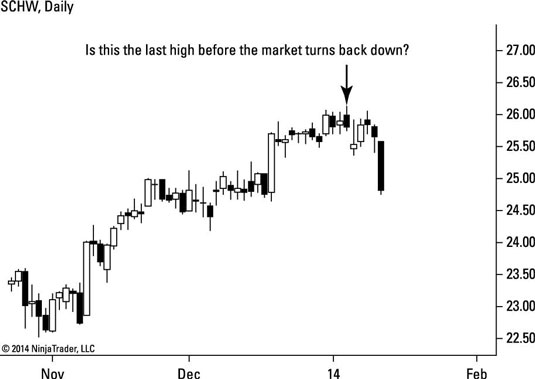 As you may have guessed, the high wasn’t the final high in the uptrend, as you can see by looking later on the same chart: 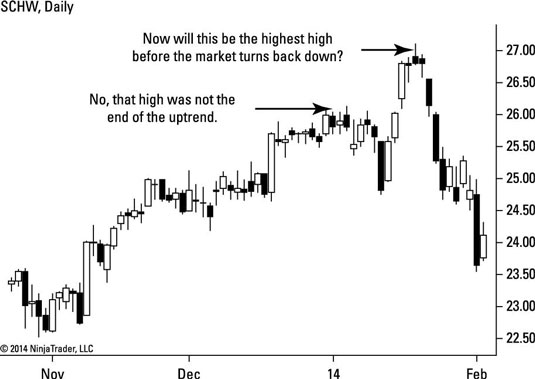