The Impact of Laws on the Cannabis Industry

Investing in Cannabis For Dummies 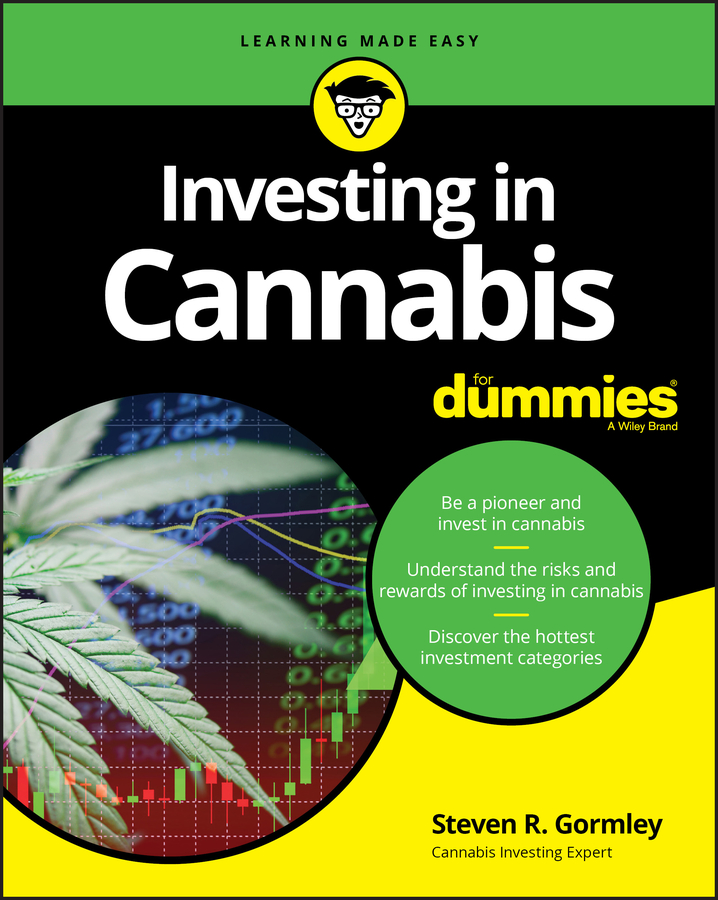 Explore Book Buy On Amazon
When discussions arise about the legality of cannabis, they usually revolve around growing it, selling it, or possessing it. However, cannabis laws and the enforcement of those laws also impact the industry, influencing everything from where different cannabis businesses can operate and under what conditions, to the taxes and fees they pay and, ultimately, the cost and availability of the product.

Complications and confusion often arise over differences in laws and regulations at the federal, state, and local levels. For example, in the U.S., cannabis is illegal at the federal level, legal for medical use in many states, legal for both medical and adult use in several states, and prohibited for sale and possession in many municipalities within states where it’s legal.

In 2013, Uruguay became the first country to officially legalize cannabis for both medical and adult use. In 2018, Canada became the second country and the first G7 member to legalize cannabis. In the provinces of Quebec and Alberta, the legal age is 18; in the remainder of the country, it’s 19. In New Jersey, before voters even had a chance to vote on a proposition to legalize adult-use marijuana, more than 50 local governments already had passed laws banning its sale or possession.

This article brings you up to speed on federal, state, local, and international marijuana laws in the hopes that by knowing the laws, you’ll be better prepared to ride the waves that are sure to rock the cannabis industry as its future unfolds.

In the U.S., in the 1800s, marijuana was used as an ingredient in many medicinal products sold in pharmacies across the country, but by 1931, 29 states had outlawed it, citing research at the time that linked the use of marijuana with violence, criminal activity, and other deviant social behaviors.

Federal regulation didn’t occur until President Franklin D. Roosevelt signed the Marihuana Tax Act of 1937, which required every person who sold, acquired, dispensed, or possessed marijuana to register with the Internal Revenue Service (IRS), pay taxes on their transactions, and complete an order form that required the name and address of both buyer and seller and the amount of marijuana being sold or bought. Although the act did not specifically criminalize marijuana, it came to be used in that way.

In 1970, the Supreme Court overturned the law, and Congress repealed it but simultaneously passed the Controlled Substances Act, designating marijuana a Schedule 1 controlled substance based on the belief that it had a high potential for abuse, no currently accepted medical use, and a lack of accepted safety regarding the use of the drug. Adding marijuana to the list of Schedule 1 controlled substances (along with heroin, LSD, ecstasy, and magic mushrooms) effectively made it illegal for anything other than very limited research.

In particular, the following activities are federal crimes:

Federal laws and their enforcement impact cannabis businesses and investors in the following ways: Some banks are starting to serve cannabis businesses, and the Financial Crimes Enforcement Network, the financial intelligence unit of the U.S. Department of Treasury, offers guidance to banks on how to comply with regulations when serving marijuana and ancillary businesses. However, compliance places an added burden on banks to police the marijuana businesses they serve. In addition, the Department of Justice reserves the right to prosecute banks for working with these businesses, which face these obstacles: So, what does this mean for investors? Regulations generally move in a direction that favors growth and investment opportunity. At this time, more than two-thirds of Americans live in a jurisdiction that has some form of legal cannabis. The country is trending toward a repeal of prohibition, but that will likely be a slow and clumsy process from a regulatory standpoint.

If you’re looking to invest in licenses and permits, consider states with a more limited number of granted permits. States that limit the number of permits make those permits more valuable by doing so. You also want to consider states that have constitutions providing for voter referendums.

As you do, you’ll notice that most states that allow for referendums are west of the Mississippi and business friendly. There’s a historical reason for that. Those states joined the union in the 19th century, and their state constitutions are based on the Spanish and French democratic models that allow voters to pass laws by referendum. As a result, and generally speaking, states with voter referendum and business-friendly regulatory environments tend to have legislation providing for some degree of legalized cannabis.

Be careful when you’re considering investing in any company whose licenses are based on narrow zoning laws. I’ve invested in real estate that was once coveted because it was zoned for cannabis only to have the city loosen its zoning restrictions six months later. I paid a premium for the property, only to see its value drop when zoning laws made more real estate available for cannabis businesses. I could have avoided that mistake by researching more thoroughly what was on the ballot or what was being discussed by the zoning committee.

Keep an eye on the Strengthening the Tenth Amendment Through Entrusting States (STATES) Act, which would amend the Controlled Substances Act (CSA) so that any state-legal cannabis activity would no longer be considered illegal under federal law.

The STATES Act would also solve the cannabis banking problem, because the federal money-laundering statute is triggered only for illegal activities. Likewise, because the 280E provision applies only to revenue generated by illegal means, cannabis businesses would be able to deduct their business expenses just like any legal business.

Although the STATES Act has bipartisan support and was passed by a large margin in the House of Representatives, as of this writing, the bill was hung up in the Senate.

During the Obama administration, on August 29, 2013, U.S. Deputy Attorney General James M. Cole issued a trio of memos, including the Cole Memorandum, to all U.S. attorneys general. The memo informed them that due to limited resources, the U.S. Department of Justice would not be enforcing federal marijuana prohibition in states that legalized and effectively regulated and enforced their own marijuana laws.

The memo directed the state attorneys general to “not focus federal resources in your states on individuals whose actions are in clear and unambiguous compliance with existing state laws providing for the medical use of marijuana.”

Instead, states were encouraged to address federal priorities, for example, “by implementing effective measures to prevent diversion of marijuana outside the regulated system and to other states, prohibiting access to marijuana by minors, and replacing an illicit marijuana trade that funds criminal enterprises with a tightly regulated market in which revenues are tracked and accounted for.”

This memo was rescinded under the Trump administration in January 2018 by Attorney General Jeff Sessions. The impact of the rescission in individual states has yet to be determined, but it’s a cause for concern because it indicates that the feds may be leaning toward greater enforcement of the federal prohibition of marijuana.

Although cannabis is federally illegal, each state has the right to legalize it within its borders and set the rules and regulations for personal and commercial growth, production, transportation, sale, possession, and use. States fall into one of the following five categories:

The easiest way to find out where each state in the U.S. stands on legalization is to search the web for “marijuana legal states.” You’ll see a color-coded map like the one shown. State marijuana laws change frequently, so access a map from a reliable source that has current information. 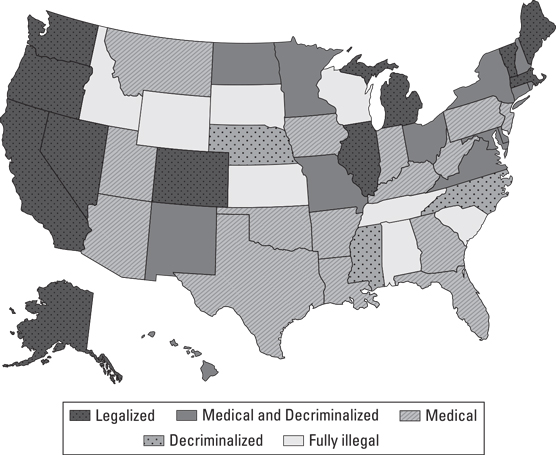 Check out an online map to determine overall legal status.

State laws and enforcement of those laws can negatively impact cannabis businesses and investors in several ways, including the following:

In states where cannabis is legal, local municipalities can separately regulate its growth, production, and sale within their borders. They are also allowed to add taxes and fees to commercial efforts above and beyond those of the state. In some cases, municipalities can completely ban commercial endeavors. For example, Colorado Springs permits medical sales but has continued to ban adult-use dispensaries. Penalties can vary significantly from one municipality to another.

These variations and costs can negatively impact the sales and profits of cannabis businesses, even in states in which cannabis is legal.

Cannabis laws in other countries

As an investor, you want to know about a cannabis company’s range of operations—specifically, the countries it serves around the world. A company that operates in several countries may be less susceptible to changes in laws and regulations than a company operating in only one country. In addition, a company’s global reach reflects its ambitions for growth. Here’s a list of countries in which cannabis is legal or decriminalized to some degree:

Carefully research each market before investing in companies that operate in it. Examine the laws and enforcement of those laws, cannabis demand, the costs of doing business, competition from illegal sellers, and other factors to gain a better understanding of the potential for sales, profits, and growth, as well as the risks involved.