The Advance/Decline Line in Trend Trading

The declining issues index measures the number of stocks moving down at any given time, again regardless of the volume of those stocks.

The difference between the advancing and declining signals

Generally, the advance/decline line has more up and down swings than the up/down volume index. You can plot it as bars and apply a 20-period exponential moving average (EMA), which gives more weight to the most recent prices in calculating the average. (The period just refers to the number of bars on the chart used to calculate the average.)

Then use the angle of that average as your reference as to whether the advance/decline index is moving up or down.

Many data feeds have a single symbol for the advance/decline line. It may be something like ^ADD or $ADD. Ask your data provider for the symbol it uses. 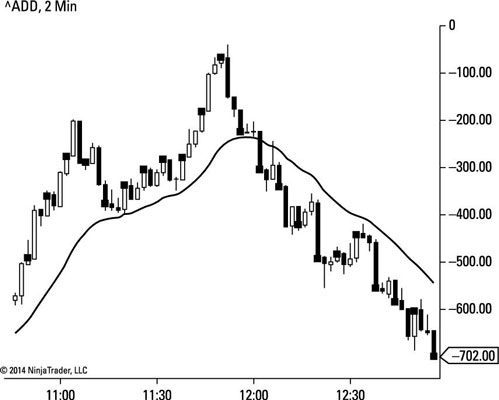 The following figure illustrates one of these situations. Here, the pattern sets up between these two indexes, and the market creates a trend against the direction of the up/down volume index, allowing for a high-probability trend reversal trade (which is the highest reward-to-risk setup but generally has a low win/loss ratio). 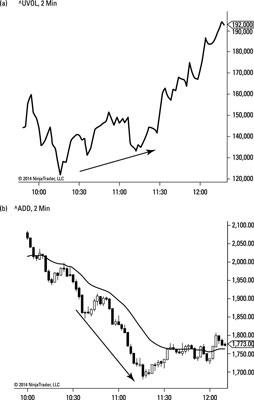