How to Interpret the MACD on a Trading Chart

Explore Book Buy On Amazon
The Moving Average Convergence-Divergence indicator (MACD) is a model that follows the momentum of trends by showing the relationship between two moving averages of the price of a security. You can insert any moving average into this model that suits your fancy, and it back-tests well on your security. On a trading chart, the MACD was designed to use exponential moving averages of 26 and 12 days.

A full MACD indicator, as shown in this figure, includes: 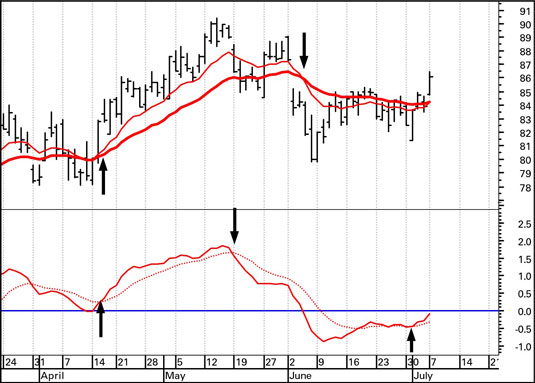 The arrows in this figure show where you would buy and sell:

The MACD’s forecasting ability makes it one of the most popular indicators, but it's not a crystal ball. Watch out for attributing too much to it. A shock can come along and cause the price to vary wildly from the trend, so the tendency to converge or diverge becomes irrelevant. A new price configuration develops, and because the MACD is comprised of moving averages, the indicator still lags the price event like any other moving average.

You may find it hard to read the MACD indicator, except when the trigger is actually crossing the indicator line. You’re not alone. Another way of displaying the MACD, in histogram format, is much easier on the eye. 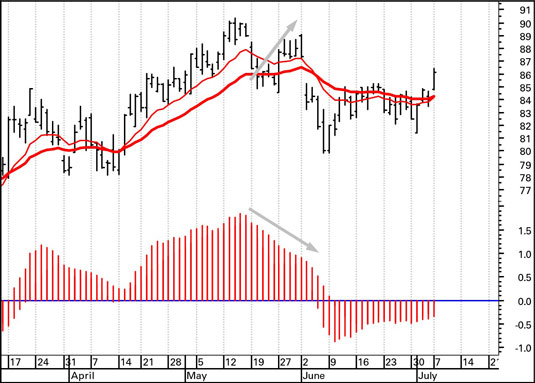 When the bars are upside down (below zero), the signal is to sell. What do you do when the bars become less negative? This indicator means selling pressure (supply) is running out of steam. Technically, you don’t get a buy signal until the bars are actually over the zero line, but it’s up to you whether to act in anticipation that it will cross the line.