Floor trader pivots are support/resistance levels that floor traders have used in the pits of the exchanges for many years. They define an equilibrium point (considered a neutral market) called the pivot point or central pivot.

Because the floor traders use these levels, they’ve become popular among people who trade off the floor, attempting to follow the same techniques used by the professionals trading on the floors of the exchanges.

The most popular method for calculating floor trader pivots is the original formula. The formula uses the previous day’s high, low, and close to calculate the central pivot (neutral area for the market):

You then calculate these support/resistance levels based on the following formulas:

Other formulas for calculating pivots exist. Some of them have been created by reputable traders and may be useful. However, using the traditional calculation is best simply because it’s the one used by most traders. Market movements are often caused in response to what the masses see.

How and why floor trader pivots work 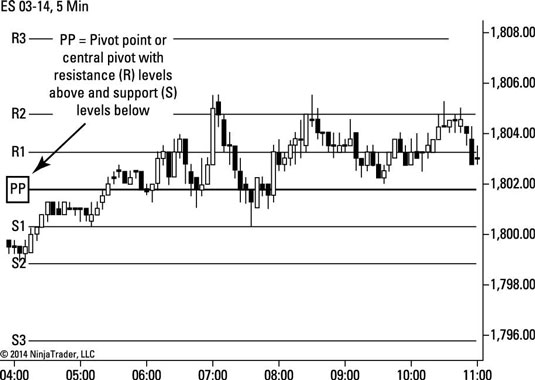 This example is fairly typical. Some days, the market stays between S1 and R1. Such days are considered neutral and directionless. They’re also characterized by low volatility and don’t provide great opportunities for large profits because the range of the market is limited.

Markets rarely break above R2 or below S2. When they do, the market is considered to be in an extremely bullish or bearish mode, respectively.