Energy of Scale when Trading with the Five-Energy Methodology

You can trade when only four of the five energies align, giving you a buy or sell signal. That is true, with this one caveat: The energy of scale must always support your trade. This is the one energy that can’t be left out.

This energy acts as either a filter to keep you out of an otherwise valid trade setup on the short-term chart or as confirmation to take the trade. In this way, the energy of scale is the most important of the five energies because you can’t take any trade without its permission!

Look for setups on the setup chart, which is the short-term chart, where you analyze the first four energies and make sure they align:

After you find those four energies aligning in that manner on the short-term chart, look for confirmation of the energy of scale on the long-term chart.

The figure provides an example of how simple it is to read that confirmation of the energy of scale. A fairly steep angle is preferable, but as long as the angle of the line is clearly in the direction of the trade, you can consider it confirmed.

If you aren’t sure whether the MACD line is angling up or it looks flat, refer to one of the basic rules of trading: “If it’s not clear, pass on the trade.” 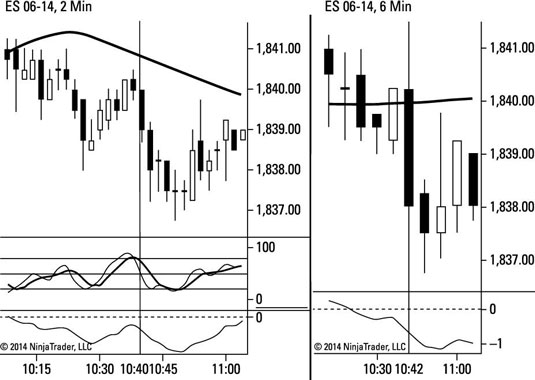