Understanding the Difference between a Correction and a Bear Market

By: Paul Mladjenovic and
Updated: 03-26-2016
From The Book: Precious Metals Investing For Dummies 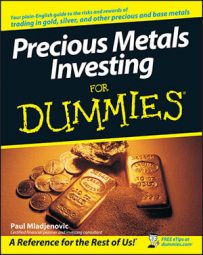 In the summer of 2006, precious metals, energy, and other commodities experienced a correction, or a temporary pull-back in their prices. Gee, why say correction? It sure as heck doesn't feel correct (it feels pretty incorrect, actually). A correction is a temporary, normal, and healthy part of a bull market. Sure, it might make you flinch when you see your investment go down 10 percent or 20 percent. It's not unusual to see precious metals corrections go down an unsettling 30 percent. What are you going to do?

First, understand the difference between a correction and a bear market. It's like the difference between fainting and dropping dead. In a healthy, long-term bull market, frequent corrections are part of the process. Prices drop temporarily for various reasons, such as profit taking and similar events that are not evidence of a fundamental change in the prospects of that asset or industry.

Take gold for example. If you saw a chart spanning 2000–2007, you'd see a beautiful sight: a gorgeous zig zag sloping upward through that seven-and-a-half-year time frame. It went from under $300 (technically, the bottom was in 2001 at $252), and it went over $670 in early August 2007. But during that time it had some scary, financially bruising periods. That chart would show you no less than seven corrections of 10 percent to 30 percent. Ouch! However, that's part of the world of investing. Bull markets and corrections go together like Jekyll and Hyde (sort of).

How do you know the difference between a correction and a bear market? In a word: fundamentals. What are the fundamentals? This is a general reference to things that affect the price of an investment, such as supply and demand, economic trends, and other factors. Over the span of this decade, investment and industrial demand for gold rose significantly while supply (mined from the earth) did not. As China and India became economic powerhouses, their appetite for gold also grew. The bottom line is that gold's market looks strong for years to come.

A good example of a bear market (when an asset or industry has a very long period of dropping prices) is what happened to Japan's real estate market during the 1990s. Real estate values hit an all-time high in early 1991. However, the very expensive prices diminished demand. More houses put on the market increased supply. What followed was 12 consecutive years of falling prices. In late 1991, Japan's housing market didn't faint; it dropped dead.

Paul Mladjenovic is the owner of Prosperity Network and www.Super MoneyLinks.com. He is also the author of Stock Investing For Dummies, 2nd Edition.