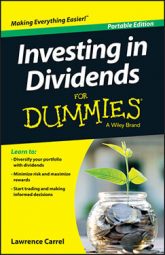 The classic dividend story consisted of someone, typically a grandma or great-aunt, who bought a hundred shares of AT&T in the 1930s or 1940s and became rich by holding on for decades as the dividend and share price just kept rising.

For the most part, the term widows and orphans stock has outlived its usefulness. Utilities still have their preferred government status, which allows them to operate legally as monopolies, but you don't see many huge, nationwide bulwarks like AT&T anymore.