By: James H. Allen III and III and
Updated: 03-26-2016
From The Book: Mechanics of Materials For Dummies

Mechanics of Materials For Dummies 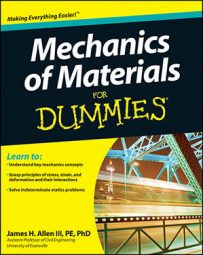 Deformations measure a structure's response under a load, and calculating that deformation is an important part of mechanics of materials. Deformation calculations come in a wide variety, depending on the type of load that causes the deformation. Axial deformations are caused by axial loads and angles of twist are causes by torsion loads. The elastic curve for flexural members is actually a differential equation.

The following list shows some of the most commonly used deformation expressions you encounter in mechanics of materials:

James H. Allen III, PE, PhD is an assistant professor of civil engineering and a registered professional engineer. His specialty areas include structural engineering, numerical analysis and error control, and steel design. He is also the author of Statics For Dummies.