Even and Odd Signals

To check the even and odd signal classification, use the Python rect() and tri() pulse functions to generate six aperiodic signals. Here’s the code for generating two of the signals:

Check out the six signals, including the classification: 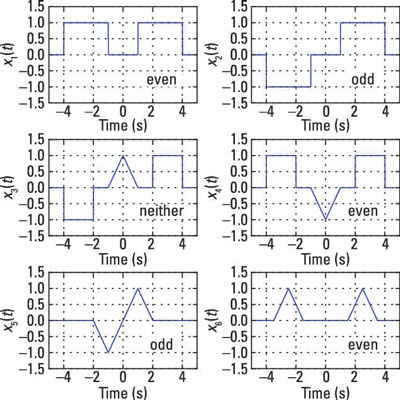 A single sinusoid in cosine form, without any phase shift, is even, because it’s symmetric with respect to t = 0, or rather it’s a mirror image of itself about t = 0. Mathematically, this is shown by the property of being an even signal:

Similarly, a single sinusoid in sine form, without any phase shift, is odd, because it has negative symmetry about t = 0. Instead of an exact mirror image of itself, values to the left of t = 0 are opposite in sign of the values to the right of t = 0. This is mathematically an odd signal:

If a nonzero phase shift is included, the even or odd properties are destroyed.