How to Determine Cutting Speeds for Machining Tools

Explore Book Buy On Amazon
All cutting tools have a recommended cutting speed for any given material. Softer metals like aluminum and mild steel have higher cutting speeds than do nasty metals like titanium or Inconel. So, too, can carbide and ceramic cutting tools achieve higher speeds — regardless of the workpiece material — than do ones made of high-speed steel (HSS), which is positively turtlelike compared to its harder, more wear-resistant brethren.

Cutting speeds are specified in feet per minute (imperial measure), or meters per minute (for metric). On a rotary tool such as a drill or end mill, this is a measure of how fast its periphery spins relative to the workpiece clamped to the table. It's essentially the same with the tools used on lathes, except that their cutting speeds are measured by how fast the spinning material moves past the edge of the (stationary) turning tool.

It can be a difficult concept to grasp, but consider a tire rolling down the street. If that hunk of rubber rolls one-quarter mile in 60 seconds, its equivalent "cutting speed" would be 1,320 feet per minute (equal to 15 mph), which is a fairly normal clip if this were a carbide tool machining aluminum. Now imagine your car's axle is a machining center spindle, with a Michelin-sized end mill mounted to the tire. Jack it up so the wheels are in the air, hop in, and apply the gas until the speedometer hits 15 mph. Voilà! The outside of the end mill/tire will be zipping past the surface below at 1,320 SFM (surface feet per minute).

Okay, but how fast is the thing actually rotating, or its rpm (revolutions per minute)? Since machining centers don't have gas pedals (nor gages that announce the current cutting speed), spindle rpm is the value we have to plug into the CNC program. To determine this (you might need to break out the calculator), simply multiply the recommended cutting speed by the value 3.82 (round up to 4), and then divide by the tool diameter. For example, the ridiculously priced All Season 235/55R19 tires are a smidge over 29 inches in diameter, so that would mean (3.82 x 1320 SFM)/29.2 = 173 rpm.

You're about to venture into CNC programming territory. Sorry about that, but because of the way machining centers and lathes operate (and cutting tools cut), some prerequisite knowledge of G-codes is needed to make sense of the following feed and speed discussion.

Lathes are a bit smarter, but also more complicated. They can use the same constant spindle rpm approach used on machining centers (lathes require a G97 command to turn this on) or use constant surface speed (CSS), which is invoked with a G96 command. In the tire example, commanding G96 S1320 actually generates a spindle speed of 173 rpm while turning a workpiece 29.2 inches in diameter. However, as you move the tool closer to center, the spindle speed increases but maintains the same cutting speed (that's the "constant" part of CSS):

At 1 inch, the spindle would be humming along at 5,042 rpm, a dangerous speed for a workpiece that large. Do the math if you don't believe me: (3.82 x 1,320)/1 = 5,042. This illustrates an important point: The smaller a turned diameter, or the diameter of a rotary tool, the higher the rpm. (The figure shows some cutting speed advice on very small rotary cutting tools.) 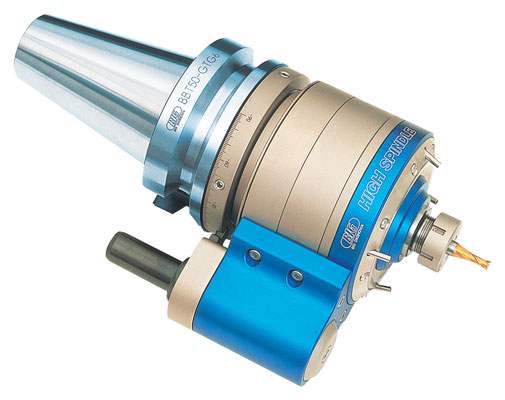 Courtesy: BIG KAISER
At 500 SFM, a 1/8-inch cutter requires nearly 16,000 rpm, while a 1/16-inch tool needs twice that, far beyond what's available on most machining centers. The answer is a speeder head, which depending on the brand and model, can easily achieve spindle speeds of 50,000 rpm or higher (often way higher).