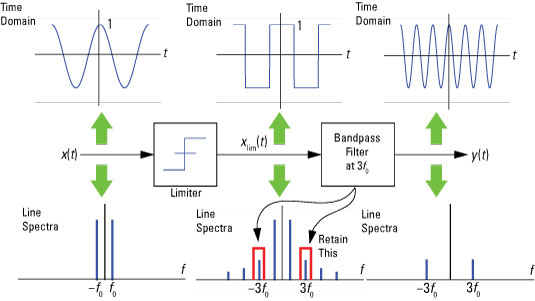 The circuit design for the tripler uses radio frequency circuit design principles, but the theory of operation is firmly rooted in signals and systems theory — the Fourier series modeling, to be exact.

The input to the tripler is

The action of the limiter circuit, which is a nonlinear system, is to clip the sinusoidal input and convert it to a square wave. The function sign() in Python acts as an ideal limiter because it outputs 1 when the input is greater than 0 and –1 when the input is less than 0.

A square wave contains only the odd harmonics due to the odd half-wave symmetry property. Here, 3f0 is of specific interest. The band-pass filter, centered on 3f0, allows you to keep the 3f0 term of the Fourier series and reject harmonics at other frequencies. Mathematically speaking, the frequency response of the band-pass filter will pass signals only in the vicinity of the center frequency, which is 3f0 in this case.

Therefore, this is a band-pass filter design issue you want to avoid. A small deviation from odd half-wave symmetry is acceptable because the second and fourth harmonics remain small.