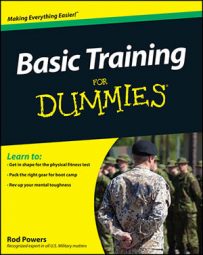 Explore Book Buy On Amazon
Before you head off to basic training, you should be familiar with a few basic items, such as military ranks, chain of command, and military time. You also want to make sure that you know the rules of being sentry.

Ranks of the military branches

Different branches have different military ranks. Here’s a list to help you prepare, whether you’re heading off to basic training for the Army, Air Force, Navy, Coast Guard, or Marine Corps.

Warrant Officers (all branches except the Air Force):

The chain of command

In the military, you need to know who is in charge — in essence, the military chain of command. You should always go directly to your superior (and not your superior’s superior!). This handy guide lets you know who reports to whom.

Rules of the sentry

When you’re sentry in the Army, Air Force, Navy, Coast Guard, or Marine Corps, it’s important to take your responsibility seriously. Follow these 11 rules, no matter which military branch you’re in, and you’ll never go wrong!

The military is all about being on time. Of course, when you arrive at basic training, you need to learn to tell time in a whole new way — the military way! Master this list, and you’ll have no reason to ever be late!

Rod Powers, a recognized expert in all U.S. military matters, is the author of ASVAB For Dummies and serves as a military guide for About.com.