Getting Plucked: A New Way to Land a Good Job 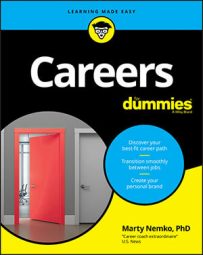 Explore Book Buy On Amazon
Through the 1970s, most people landed their job by answering ads. Then, the dominant approach became networking: informational interviews, pitching friends, even cold-contacting target employers that were not advertising a job. But today, networking has a competitor: an online presence that’s attractive enough that recruiters pluck you out and invite you to apply for jobs. Here are three keys to becoming pluckable: Careers for Dummies includes such specifics as sample reach-outs to potential employers.

Marty Nemko, PhD, has been career coach to 5,400 clients, enjoys a 96% client-satisfaction rate, and was named "The Bay Area's Best Career Coach" by the San Francisco Bay Guardian. He has been interviewed in hundreds of major publications from the New York Times to theLos Angeles Times, and has appeared onThe Today Show andThe Daily Show with Jon Stewart. He hostsWork with Marty Nemko on a National Public Radio station in San Francisco. His first job? Piano player in a Bronx bar at age 13. His second? Taxi driver.