Just What Is a Pop Up Business? 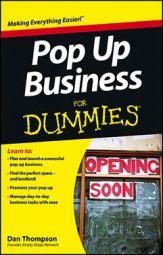 You see pop up cinemas and pop up cafes, pop up shops and all types of pop up businesses everywhere you look. What’s going on with this pop up phenomenon?

So what separates a pop up from other projects? To truly qualify as a pop up, a project should:

Pop ups have been around a long time, in one form or another; they’re very much a movement that started with artists looking for temporary space to exhibit work, hold stage shows or create studio spaces. And good pop ups still need a bit of creativity.

Throughout the years, most major towns and cities have things happening that you could call a pop up. Take London. You could draw a line from Shakespeare’s reuse of the old gatehouse of Blackfriars Monastery straight to Camden’s Roundhouse, which was used in the 1960s, for theatre and music happenings. In South London, Brixton Art Gallery ran from 1983 to 1988 in an old carpet showroom.

More recently, Space Makers worked in 20 empty shops in a market just around the corner. Many of these businesses started as pop ups, but have become more permanent over time.

While London has boasted high-profile pop ups, others have existed around the world and are part of the wider movement of reusing old buildings. Think of Andy Warhol’s Factory in New York, the Musée du Louvre in a former palace in Paris or the mass of buildings in Berlin used as cafes, art galleries and nightclubs.

Some very famous people started out this way. Tracey Emin ran a shop in Bethnal Green for six months, with fellow artist Sarah Lucas. Called ‘The Shop’, it sold a range of products they’d designed and manufactured, and the pop up led to Emin signing with a major art dealer.

More recently, pop up has gone from being something creative people do to being something mainstream. Re:START, a pop up shopping mall in Christchurch, New Zealand, came about after earthquakes destroyed existing shops, with the aim of starting the regeneration of the city.

Shopping centre owners Westfield now dedicate space to pop ups in all their centres worldwide, and they’re used by luxury travel brand Kuoni, designer Cath Kidston and even BMW (to promote its Mini brand), for example.

A range of businesses you’ll be familiar with already use pop up shops:

Dan Thompson is an artist, writer and founder of the Empty Shops Network. An expert in the creative use of empty shops, Dan has pioneered the use of shops as community hubs and has written about the problems facing town centres for The Independent and The Guardian.