By: The Experts at Dummies and
Updated: 07-15-2016
From The Book: Small Business Marketing Strategies All-in-One For Dummies 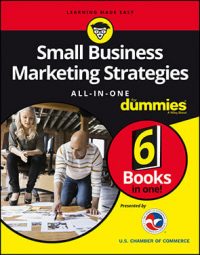 Explore Book Buy On Amazon
There are hundreds of websites that would qualify as social media. The phrase social media marketing generally refers to using these online services for relationship selling — selling based on developing rapport with customers. Social media services make innovative use of new online technologies to accomplish the familiar communication and marketing goals of this form of selling.

The tried-and-true strategies of marketing (such as solving customers' problems and answering the question, "What's in it for me?") are still valid. Social media marketing is a new technique, not a new world. You can categorize social media services, but they have fuzzy boundaries that can overlap. Some social media sites fall into multiple categories. For instance, some social networks and online communities allow participants to share photos and include a blog.

The U.S. Chamber of Commerce is the world's largest business organization representing the interests of more than 3 million businesses of all sizes, sectors, and regions. Join Small Business Nation today, at uschamber.com/joinsbn.