Forming a Committee from the Board of Directors

By: Jill Gilbert Welytok and Daniel S. Welytok and U.S. Senator Chuck Grassley and
Updated: 03-26-2016
From The Book: Nonprofit Law and Governance For Dummies

Nonprofit Law and Governance For Dummies 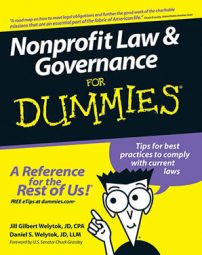 An organization's board of directors is responsible for forming committees when necessary. Committee members must be drawn from the current members of the board itself, so having a talented and diverse board is an extremely important ingredient to the success of an organization. The board's power to form committees is usually addressed in the organization's bylaws. A typical bylaw provision on this subject usually allows the board to form any type of committee it deems appropriate, and also allows the board to delegate certain powers to a committee.

It's important to note that although a board can delegate certain powers to a committee, it's the board at large that's ultimately responsible for the decisions it makes based on the work of a committee.

When committees are formed

Standing committees are generally formed at the onset of an organization's existence — usually at the first or second meeting of a newly formed board. Special committees, on the other hand, usually evolve from a board discussion of a pressing matter or issue that needs attention. At this time, the board asks volunteer directors to sit on the committee in order to study the issue and make a recommendation to the full board. The formation of a special committee is noted in the minutes of the board meeting, along with what the committee's mission is, who will serve on it, who will chair it, and what time frame it is on to accomplish its mission.

Who sits on a committee

The function of a committee drives who will serve on it. The board of directors looks at its roster and decides who would fulfill the functions of a particular committee — this is especially important with standing committees that require special expertise. An organization's audit committee generally requires that at least one committee member be well-versed in financial matters. Where a committee is formed to accomplish a specific task, special expertise may not be as important as other considerations, such as which committee members have the time to devote themselves to the task.

After a committee is appointed, it usually schedules its own meetings. Unless face-to-face communications are required, many committees conduct some meetings by teleconference. The first point of order at an initial committee meeting is to decide what the scope of the task is, what form the committee's work product will take (for example, a report, a recommendation, an evaluation, and so on), and who will do what to accomplish the committee's goal. A timetable with milestones is generally set and at the conclusion of the meeting, the committee sets a date to reconvene so that each member can report on the progress of an assigned task.

Minutes of committee meetings may be taken, depending on the formality of the meetings, the type of committee, and the tasks assigned. However, where a committee needs to report to the board on a periodic or ongoing basis, minutes are usually required.

Jill Gilbert Welytok, JD, CPA, LLM, practices in the areas of corporate law, nonprofit law, and intellectual property. She is the founder of Absolute Technology Law Group, LLC (www.abtechlaw.com). She went to law school at DePaul University in Chicago, where she was on the Law Review, and picked up a Masters Degree in Computer Science from Marquette University in Wisconsin where she now lives. Ms. Welytok also has an LLM in Taxation from DePaul. She was formerly a tax consultant with the predecessor firm to Ernst & Young. She frequently speaks on nonprofit, corporate governance–taxation issues and will probably come to speak to your company or organization if you invite her. You may e-mail her with questions you have about Sarbanes-Oxley or anything else in this book at [email protected] You can find updates to this book and ongoing information about SOX developments at the author’s website located at www.abtechlaw.com.

Daniel S. Welytok, JD, LLM, is a partner in the business practice group of Whyte Hirschboeck Dudek S.C., where he concentrates in the areas of taxation and business law. Dan advises clients on strategic planning, federal and state tax issues, transactional matters, and employee benefits. He represents clients before the IRS and state taxing authorities concerning audits, tax controversies, and offers in compromise. He has served in various leadership roles in the American Bar Association and as Great Lakes Area liaison with the IRS. He can be reached at [email protected]