How to Set Pricing at Cost-Plus

Many retailers and manufacturers set their prices at cost-plus by adding a fixed markup to their absorption cost. Cost-plus pricing ensures that prices are high enough to meet profit goals. The figure illustrates how cost-plus pricing computes the sales price by adding markup to a product’s fixed and variable costs. 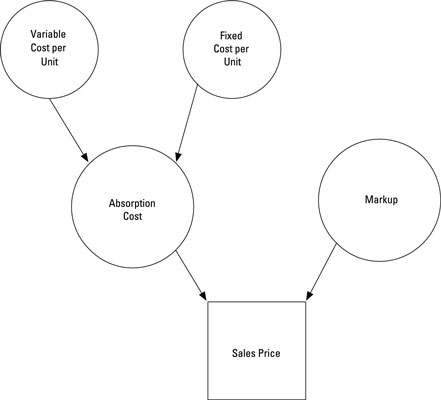 How to compute fixed markups

To figure out the markup for cost-plus pricing, divide total desired profit by the number of units produced.

Dividing the desired profit by units produced results in a planned markup of $1,000 per unit. To set the price, add this planned markup to the cost. Assume that Saint’s cost to produce each robot is $4,000:

How to set a cost-plus percentage

Cost-plus pricing works because it’s easy to use. However, it carries a few drawbacks. First, it ignores market factors. Just because you like to mark up your merchandise 20 percent doesn’t necessarily mean your customers are willing to pay this price or that your competitors will cooperate with you by setting their prices even higher.

Second, because cost-plus pricing relies on absorption costing, it treats fixed costs as though they were variable. Saint Company wants to sell 100 Model 51 Robots, which means it can distribute its fixed costs over 100 units.

Look on the bright side: If your sales volume is higher than you expected, then it will have a disproportionately positive effect on income — delivering profits way beyond your wildest dreams.