How to Prepare Part 2 of a Cost of Production Report

The second part of the cost of production report accounts for the units that the first part indicates the department is responsible for. During April, the Balloon department finished working on 1,900 clowns, sending them to the next department. At the end of April, the Balloon folks still had 800 clowns of WIP on the assembly line, waiting for their balloons.

This progress means that the Balloon department has accounted for 2,700 units:

For example, suppose that the Theresa Toy Factory Assembly department made and finished 100 rubber ducks. It also had 30 units still in process left over at the end of the period, all half complete. These unfinished ducks equal 15 equivalent units (30 units x 0.5 complete). The total equivalent units of production equal 115: 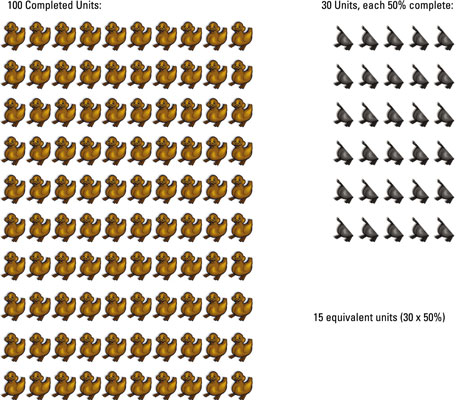 You can also apply the equivalent units concept to direct labor and overhead costs. These costs are sometimes referred to as conversion costs because they’re the costs of converting direct materials into finished goods.

To compute the equivalent units produced by the Bending department, apply the same formula as you did for the ducks, but do so twice: once for direct materials and a second time for conversion costs.