Keeping Silent or Telling the World: The Wiccan Dilemma 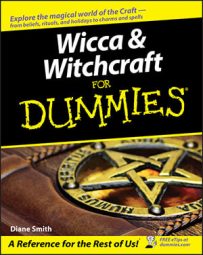 Some people cautiously hide their beliefs and never tell others about their involvement in Wicca — not their families, not their friends, and certainly not their employers. They hide their altars, keep their books hidden in drawers instead of displayed on shelves, and find an excuse to leave in a hurry when people start talking about religion. They only share their beliefs with like-minded Wiccans, and sometimes with no one at all.

Other people, from the moment they encounter Wicca, begin telling everyone they know about the wonderful new world that they have discovered. They heap books on their friends, they hang pentacles in their cubicles at work, and they wear bold T-shirts proudly displaying their devotion to Wicca. They're proud, and they want the world to know it.

Both of these positions have merit.

People who keep silent aren't just being paranoid. Most Wiccans are well versed in the long and brutal history of persecution against real and alleged Witches. Discrimination and persecution continue today around the world. In the United States, Wiccans are fired from jobs, lose custody of their children, are discriminated against in housing, or are forced to make other painful sacrifices because of their religion.

Some people want to keep silent because they worry about being put in a position where they are forced to divulge the names of fellow Wiccans. In addition, some Wiccans are alarmed by the escalating use of technology to collect and reveal very private information about individuals.

So, quite reasonably, some Wiccans choose to limit the number of people who know about their religion and could cause them trouble — or even put them in danger — now or in the future.

Keep in mind that you should never ask someone directly whether he or she is a Wiccan or a Witch. Wait until the information is volunteered. If a person mentions the subject in conversation, show that you are open minded and receptive, but wait for the person to confide in you. And this advice goes double if others can hear your conversation. Never, and I mean never, "out" anyone. Don't divulge to others that someone is Wiccan without first getting permission in private. Please respect that some people want to keep their religion to themselves.

In addition to concerns about discrimination or persecution, some Wiccans consider Wicca to be a mystery religion that should be kept secret. A mystery religion is one in which the Deity is revealed through individual, personal experience. These events are kept secret in order to preserve their power and significance. Also, according to this view, some things are best taught person to person and should not be made public. In addition, certain knowledge and techniques (magic, for example) may be dangerous if used by people who have not had proper training or who may intend to harm others.

People who choose to openly share their beliefs also have some very good reasons for doing so. Personal empowerment as well as physical, mental, and emotional strength are central to Wicca. Some Wiccans feel that living in fear of discrimination or conflict is contrary to their beliefs and limits their ability to practice their religion. Being open and honest about Wicca builds self-confidence, which in turn makes magical work more effective and makes ritual more fulfilling.

Some Wiccans believe that keeping their spirituality hidden encourages persecution and puts Wiccans in more danger, not less. Many feel that denying their religion dishonors the Goddess and the God. They also believe that silence dishonors the Witches and alleged Witches who have been killed in the name of Witchcraft.

Most Wiccans, though, find themselves at a happy medium between these two extremes. Most share their beliefs with family and friends. A smaller number are open about their religion in the workplace. Everyone has to determine his or her own level of comfort.

Many people find Wicca to be liberating and joyous. In their enthusiasm for their new religion, new Wiccans may be tempted to chatter on about their religion to anyone who will listen, without sizing up the person or the situation. If you are considering Wicca as your spiritual path, do some studying, get the facts, and make up your own mind about Wicca. Then, before you start moving that 50-pound pentacle into your cubicle at work, give some careful consideration to whom you want to tell and what you want to say about Wicca.

Some Wiccan traditions advise that newbies study and train for a year and a day before disclosing their participation in Wicca to their personal communities. (A year and a day is a traditional time period in Wicca. The year-and-a-day approach is to ensure that Wiccans prepare well and consider all consequences before making major changes in their lives.)