Getting to Know the Nature of God through the Torah 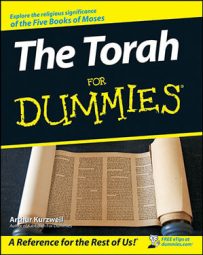 In Jewish tradition, the way to find the path to God is to study the Torah. In addition to all its teachings about behavior and ritual, the Torah is also the main source for information about the nature of God. By studying the Torah and seeing the way in which it describes God, students begin to understand some of God's nature.

According to the Torah's view of existence, God is the source of everything, and God is eternal — He is, He was, and He will be. The first of the Ten Commandments, "I am the Lord thy God," is the commandment to recognize God's existence. This simple statement is at the core of all Jewish belief and everything that the Torah represents.

The Torah is written in Hebrew, and its references to God often use the masculine form. As in English, the use of male pronouns often has no relation to gender; for example, people talk about "mankind" when they really mean "humankind." In the Torah, God isn't a male, and any effort to conceive of God as a male is limiting and therefore is forbidden according to the tradition of the Torah. Using gender-specific pronouns in reference to God is merely a linguistic limitation.

God is a single entity

A prayer known as the Shema (sheh-mah) is recited twice a day in Jewish life, and its words come from the Torah. Its lead sentence, which is best known among Jews, is Shema Yisrael Adonai Elohaynu Adonai Ekhad (sheh-mah yis-rah-ehl ah-doe-nahy eh-low-hay-new ah-doe-nahy eh-khahd; Hear O Israel, the Lord our God the Lord is One). In other words, the daily ritual among Jews establishes and repeats the view of God as One.

Jewish teachings describe God as omnipresent. With the idea that God is everywhere and both near and far, it's important to make a distinction between the Torah view of God and pantheism. The point of view of the Torah is that everything resides in God, whereas pantheism is marked by the notion that everything is God.

One way that God is described in Jewish liturgy is Aviynu Malkaynu (ah-vee-new mahl-kay-new; our Father our king). This phrase implies that God is both near and far. Your father is close and familiar; you can sit on your father's lap and touch his cheek. A king, on the other hand, is someone whom you may never see in your lifetime.

God stretches out His arm, but He has no arms

Students of the Torah constantly confront a seeming contradiction within the text. The Torah makes it clear that no person can conceive of God, and yet at times it describes God in human terms.

A famous image from the Torah is of the "outstretched arm of God." The Torah says, "I am God, and I shall take you out from under the burdens of Egypt. I shall rescue you from their service. I shall redeem you with an outstretched arm and with great judgments" (Exodus 6:6). An outstretched arm is a very concrete image. Yet it's forbidden by Jewish law to conceive of God in any concrete way or to limit God with any image. So how do you reconcile this image? An important principle of Torah study is that "the Torah speaks in the language of man." This notion, repeated so often in commentaries on the Torah throughout the centuries, is a reminder that people use finite images to grasp the infinite, knowing full well the impossibility of the task. These human concrete images make suggestions, but Torah literature throughout the ages warns Torah students to beware of the ways in which concrete images can get in the way rather than clarify.

Arthur Kurzweil is known as America's foremost Jewish genealogist. He is a teacher, a lecturer, and the author of several books including Kabbalah For Dummies.