By: Christopher Hodapp and
Updated: 09-24-2021
From The Book: Freemasons For Dummies

Explore Book Buy On Amazon
Freemasons are part of an ancient tradition with rituals and symbols all their own. As a Mason, you can earn degrees, join esoteric and social organizations, and become privy to the language and abbreviations specific to Freemasonry. 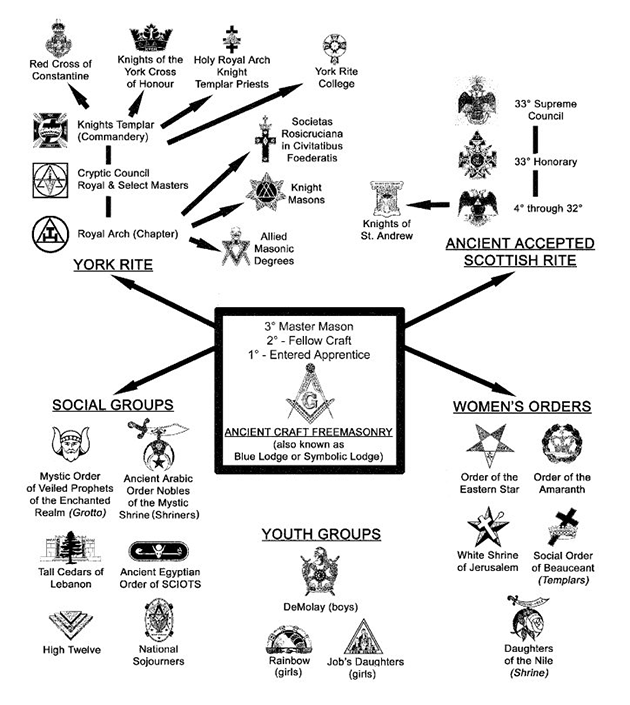 The local Blue Lodge is the place where you and your Freemason friends begin your Masonic careers. A Blue Lodge is a lodge of Freemasons that confers the first three ceremonial degrees:

Masonic degrees are rites of initiation that teach lessons of honor, morality, and virtue. You can join additional Masonic organizations which confer many other degrees, but none are considered to be of higher rank or privilege than the 3° Master Mason.

Freemasons are generally a pretty social bunch who want more and more people to enjoy their fraternity. The mid-1800s saw the addition of more groups joining the extended Masonic family, including groups for female relatives of Masons, as well as their children.

Called appendant bodies, some of these groups developed to confer more involved Masonic-style degrees. Some were started solely as social clubs for Masons. Others satisfied a desire for military-style drill teams marching in parades. Still others were created to allow wives and children to take part in the lodge experience. The following list lays out the groups for adults affiliated with Freemasonry.

The York Rite: York Rite is actually a descriptive term used for three cooperative groups (the Royal Arch, the Cryptic Council, and the Knights Templar) that confer a total of ten degrees in the United States. The degrees making up the York Rite are considered concordant to the first three Masonic degrees, meaning they confer additional Masonic degrees that enlarge and expand on the first three lodge degrees. You must already be a Master Mason before you can join the York Rite. Outside of the United States, the York Rite is often referred to as the American Rite. In addition to the initial three groups, there are many additional York Rite-related sub-groups, such as:

The Ancient Accepted Scottish Rite (or the Scottish Rite): Perhaps the most visible and least understood appendant body of Freemasonry, the Scottish Rite isn’t particularly ancient, and it didn’t come from Scotland. The Scottish Rite confers degrees 4 through 32, plus the additional 33rd degree, given for performing great service to Freemasonry or the community. It is technically a concordant body, because some of its degrees continue the story of the building of Solomon’s Temple started in the first three lodge degrees. The Scottish Rite appears in a major role in Dan Brown’s novel (and the 2021 Peacock network streaming series), The Lost Symbol.

Freemasons encourage young people to become involved in their rituals. Over the years, Freemasons have started several groups for young people.

Officers of a typical Freemason lodge

Freemasonry is full of ritual, and for rituals you need people to be responsible for the various roles associated with the ceremonies and for the lodge in general. And what would any lodge be without a leader? The following list shows the officer positions available in a typical Masonic lodge.

The Lost Symbol: truth or fiction?

Dan Brown’s book The Lost Symbol and the TV series based on it invites much curiosity — and speculation — about a brotherhood of secrets and symbols. So what’s the truth behind the storytelling? Here are a few facts revealed:

Freemasons have their own lingo, like many organizations. They give special meaning to some common words and have terms you won’t hear anywhere but in a Masonic lodge. The following list is a glossary of sorts for some common Masonic phrases: