The head of the Catholic Church, the pope, is also the head of the smallest independent nation in the world — Vatican City. Vatican City covers only 0.2 square miles (108.7 acres), has fewer than a thousand inhabitants, and rests in the middle of Rome.

Soon after Christianity was legalized in A.D. 313, the Emperor Constantine donated the imperial property of the Lateran Palace to the Bishop of Rome. Vatican City settled into its current form in the 1870s. 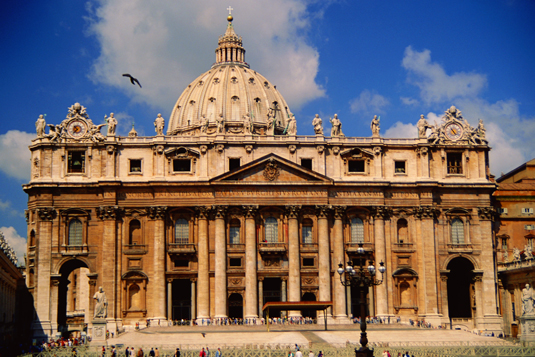 Credit: Corbis Digital Stock
The Basilica of Saint Peter in the Vatican

Today, Vatican City is the smallest independent nation in the world. Ironically, it also has the largest number of embassies and ambassadors around the globe. Marconi, the inventor of radio, built a radio for Pope Pius XI; thus Vatican Radio began in 1931. Now, in addition to a radio and short-wave antennae, the Vatican also has television and Internet programming.

The Vatican has the largest number of embassies and ambassadors around the globe. The only real citizens of Vatican City, aside from the pope, are the full-time diplomats who work for the Holy See (the pope and the various offices of Church government in the Vatican). These diplomats, clergy and laity alike, come from countries all over the world and still retain their own nationality and citizenship but are given a Vatican passport while employed to represent the Vatican.

Originally sent to Rome in 1506, about 107 Swiss guards protect the pope, decorating the outdoor square where people gather with their colorful costumes. In addition, plain-clothes Swiss guards, with electronic surveillance and sophisticated weapons, also keep a close eye on the pope, especially since the attempted assassination in 1981.

The Experts at Dummies are smart, friendly people who make learning easy by taking a not-so-serious approach to serious stuff.