What Goes on at a Catholic Baptism?

By: Rev. John Trigilio Jr. and Rev. Kenneth Brighenti and
Updated: 02-04-2020
From The Book: Catholicism For Dummies, 4th Edition

Explore Book Buy On Amazon
Baptisms in the Catholic Church usually take place on Sundays, during the parish Mass or in the early afternoon after all the Masses are over. It all depends on the parish, the pastor, and the parents at the Baptism.

Adults who were never baptized are an exception to this rule; they're highly encouraged to be baptized with other adults on Holy Saturday evening, during a service known as the Easter Vigil, because it's held on the night before Easter Sunday. Children, however, are baptized once a month or every Sunday, depending on the diocese and parish.

The person being baptized is asked to dress in white. Some parishes put a small white garment on the child, especially if she isn't already dressed in white. When adults are baptized, they typically put on a full-length white gown known as an alb, from the Latin word for white.

The white garment symbolizes the white garments that Jesus wore when he was placed in the tomb after his death on Good Friday. When the women and disciples returned on Easter day, they found the tomb empty except for the white robes. So it represents the promise of the Resurrection, made at Baptism. The promise is that the baptized body will one day die, like Christ's did, but it'll be raised from the dead someday by Christ. White also symbolizes purity of faith and cleansing.

The priest or deacon is usually the minister of Baptism, but anyone can baptize in an emergency, such as in a hospital or whenever someone's life is in danger. Here are the steps that occur during both infant and adult Baptism: 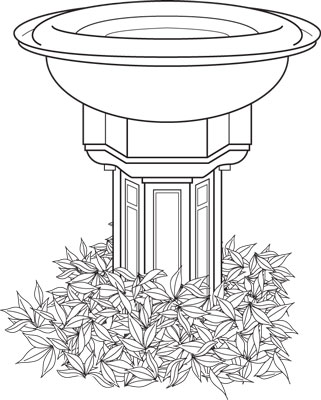 If you're invited to a Baptism:

Rev. John Trigilio Jr., PhD, ThD, is president of the Confraternity of Catholic Clergy and is executive editor of Sapienta magazine. Rev. Kenneth Brighenti is an assistant professor at Mount St. Mary's Seminary.