By: Richard Wagner and Larry R. Helyer and
Updated: 03-26-2016
From The Book: The Book of Revelation For Dummies

The Book of Revelation For Dummies 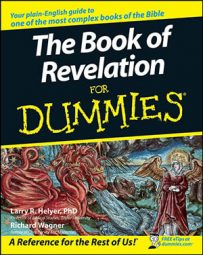 John, who wrote the Bible's Book of Revelation, was the longest living Apostle; as such, he witnessed extraordinary changes in the political, social, religious, and economic world. The following historical events were significant to John the Apostle and his audience:

Dr. Larry R. Helyer: Larry is Professor of Biblical Studies at Taylor University in Upland, Indiana. He received his doctorate in New Testament from Fuller Theological Seminary, Pasadena, California. He pastored Baptist churches in Portland, Oregon, and Sun Valley, California, before moving to the Midwest and teaching biblical studies at Taylor University for 28 years. He has taught a wide range of Bible courses covering both the Old and New Testaments and Jewish literature of the Second Temple. Larry has traveled extensively in the land of the Bible and lived in Israel for a year during his student days at Jerusalem University College.
Larry is author of two books, Yesterday, Today, and Forever: The Continuing Relevance of the Old Testament and Exploring Jewish Literature of the Second Temple Period: A Guide for New Testament Students. Larry has authored numerous journal and dictionary articles on biblical and theological subjects and has just finished a book on New Testament theology. He was the initial translator of 2 Samuel for the Holman Christian Standard Bible.

Richard Wagner: Rich is author of The Expeditionary Man, The Myth of Happiness, The Gospel Unplugged, and several For Dummies books, including C. S. Lewis & Narnia For Dummies, Christianity For Dummies, and Christian Prayer For Dummies. He has been a guest on Christian radio programs across the country discussing Christian discipleship issues as well as C.S. Lewis.
Richard has served in church leadership and teaching roles for more than a dozen years. Rich graduated with a bachelor of arts degree from Taylor University and pursued graduate studies at The American University in Washington, DC. Rich lives in New England with his wife and three sons. You can find him online at richwagnerwords.com.