11 Important People in the Bible

By: Jeffrey Geoghegan and Michael Homan and
Updated: 11-04-2021
From The Book: The Bible For Dummies 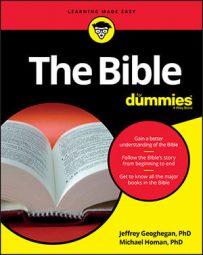 Explore Book Buy On Amazon
The Bible has a "cast" of thousands, but some of them play more important roles than others. Here are eleven of the prime players in the Bible, from the first humans to Bible prophets to Apostles to Jesus himself. Of course, the most important character in the Bible is God, but because God isn't a "people," he doesn't appear in this collection.

Okay, Adam and Eve are two people. But Adam and Eve really are inseparable. Even the Bible refers to them as "one flesh" in recognition of their coming from the same flesh (Adam's) and being joined together again in marital/sexual union.

Adam and Eve are important because, according to the Bible, they're the first two people in the world, and from them comes everyone who has ever lived.

The human drama begins when God forms Adam from the ground and breathes life into him. God then performs the first surgery, creating Eve from Adam's side (a more literal translation than "rib"). Adam and Eve live together in Paradise (or what the Bible calls the Garden of Eden) until they disobey God by eating fruit from the Tree of the Knowledge of Good and Evil. This act of defiance, called "The Fall" by many theologians, is a real bummer because from it comes painful childbirth, weeds in your garden, and, ultimately, death. Moreover, Adam and Eve's disobedience introduce fear and alienation into humankind's formerly perfect relationships with God and one another. As evidence of this alienation, Adam and Eve's son, Cain, murders his brother, Abel.

Noah is most famous for building an ark — a giant three-decked wooden box in which he, his family, and a whole bunch of animals ride out a massive flood that God sends to destroy humankind for its disobedience. God chooses Noah and his family to survive the deluge because Noah is "the most righteous in his generation." Noah is important not only because his ark decorates most nurseries in North America but also because, according to the Bible, if Noah hadn't been righteous, none of us would be here right now.

The Bible is filled with stories about people disobeying God. One notable exception is Abraham, a man who, though not perfect, obeys God's command to leave his homeland in Mesopotamia and venture to an unknown Promised Land (ancient Canaan; later Israel). God promises Abraham that his descendants will become a great nation, through which all the people of the earth will be blessed.

The tales of Abraham and his wife, Sarah, are a roller coaster of dramatic events that repeatedly jeopardize God's promise. Ironically, the biggest threat to God's promise is when God Himself commands Abraham to sacrifice his son, Isaac. Abraham sets out to do just as God orders, but right before Abraham delivers the fatal blow to his own child, God stops the sacrifice. As a reward for Abraham's faith, God fulfills His promise to make Abraham's descendants a great nation, as Isaac's son, Jacob, eventually has 12 sons, whose descendants become the nation of Israel.

Today, three of the world's major religions — Judaism, Christianity, and Islam — trace their roots to Abraham.

The Hebrew Bible describes Moses as the greatest prophet who ever lived, and for good reason. Moses is born during hard times for ancient Israel. Israelites are enslaved in Egypt, and their growing population so alarms the Egyptians that the Egyptian king orders all newborn Israelite males drowned in the Nile River.

Moses's mother saves her son's life by placing him in the Nile in a reed basket, where he is soon discovered by Pharaoh's daughter, who ironically raises Moses in the royal palace. After he's grown, Moses must flee Egypt for killing an Egyptian who was beating an Israelite slave.

Eventually, God appears to Moses in a burning bush and tells him that he must return to Egypt to deliver the Israelites from their slavery. With God's help, Moses succeeds in his mission, bringing the Israelites to Mount Sinai, where God first appeared to Moses. At Mount Sinai, God gives Moses the Law, including the Ten Commandments. Moses eventually leads the Israelites to the edge of their Promised Land (ancient Canaan; later Israel), where he dies at the ripe old age of 120.

David is Israel's second and greatest king. As a boy, David courageously defeats a mighty enemy warrior named Goliath with only a sling and a stone. As a man, David conquers all Israel's enemies and begins a dynasty that would rule Jerusalem for nearly 500 years. But not all the news surrounding David is good. David perpetrates one of the Bible's most heinous crimes: He commits adultery with a woman named Bathsheba, who's the wife of one of David's most loyal soldiers, Uriah. Then, to cover up the crime, David has Uriah killed. In David's favor, when the prophet Samuel confronts David with his sin, David repents. Moreover, in God's favor, God forgives David for his sin, but not without punishing David for his crime.

Beyond David's royal exploits (and indiscretions), he's credited with writing many of ancient Israel's worship songs, which you can read in the Book of Psalms.

Elijah is one of Israel's greatest prophets, as well as God's heavyweight champ in an epic bout against a deity named Baal (the Canaanite storm god). In order to prove to the Israelites that God is the only true God, Elijah gathers the prophets of Baal at Mount Carmel, where for the main event each deity is given a pile of wood with a bull on it. The god who can produce fire and consume the sacrifice wins. Baal goes first, and for half the day his prophets dance, shout, sing, and even cut themselves in order to convince their god to answer Elijah's challenge. When their efforts fail, Elijah prays to God, who immediately sends fire down from the sky and consumes the sacrifice. The Israelites rededicate themselves to God, and they kill the prophets who deceived them into worshiping Baal.

Later, near the Jordan River, a fiery horse-drawn chariot descends from the sky and takes Elijah to heaven, but not before he appoints a successor named Elisha. Elijah's atypical departure influenced later biblical prophets, who predicted that Elijah would return as a precursor to the coming of the Messiah. Because of these prophecies, Jews invite Elijah every Passover to usher in the age of the Messiah, and the New Testament writers associate John the Baptist, the forerunner of Jesus's ministry, with Elijah.

Isaiah is one of the most influential prophets in the Hebrew Bible. During his career, Isaiah advises several kings of Judah, helping them to avoid being destroyed by the mighty Assyrian Empire (around 700 B.C.E.).

Beyond Isaiah's political influence, he is a masterful poet, with many of his prophecies inspiring hope for eventual peace and righteousness on earth. Several of these prophecies were later understood by Christians to be predictions of Jesus, including the birth of Immanuel; the coming of the Prince of Peace, as quoted in Handel's Messiah; and the suffering of God's "Servant" for the sins of His people.

Being Jesus's mom, as you might imagine, is bound to put you in the theological limelight, and Mary holds this office with dignity and grace.

Betrothed to Joseph at a young age, Mary becomes pregnant under mysterious circumstances. Two of the four gospels claim that God is the father of her baby, but because of the silence of the other two gospels, as well as the lack of this being mentioned by Peter and Paul, it seems the doctrine of Jesus's virgin birth wasn't emphasized in the early Church — though it certainly did dominate later. The picture of Mary in the gospels is one of a concerned and loving mother who doesn't fully understand her son at times, but supports him to the end, even painfully witnessing his execution at the foot of the cross.

Much of what Christians believe about Mary arose after her lifetime and highlights theological differences between Catholics and Protestants. For Catholics, Mary maintained her virginity throughout her life. Thus, Jesus's "brothers" and "sisters" were either children fathered by Joseph from previous marriages, or cousins. But for most Protestant groups, these were just what the text says: full siblings. Also in death, Catholics believe that Mary's assumption to heaven involved not only her soul, but her body as well. For all Christians, Mary becomes venerated more than any other woman in the Bible.

The New Testament's story of Jesus is as fascinating as it is inspiring. Born and raised in the "backwaters" of the Roman Empire, Jesus begins a religious movement that eventually overtakes the Empire. According to the New Testament, Jesus is the Messiah ("anointed one," Greek "Christos"), the promised deliverer of Israel, whose death on the cross brings deliverance from sin, and whose eventual return to earth will bring deliverance from oppression by ushering in God's kingdom. Jesus's message of caring for the downtrodden, extending kindness to strangers, and loving one's enemies is still unrivaled for its profound insight and penetrating simplicity.

Jesus affectionately gives his closest friend, Simon, the nickname "Rocky," though the Greek form of the name is "Peter." Peter is a fisherman until Jesus calls him to be a disciple or "a fisher of men." Peter soon becomes the "rock" on which Jesus would build his church, even giving him the keys to the kingdom of heaven. Therefore, according to Catholic doctrine, Peter is the first Pope, the vicar (or substitute) of Christ.

But even Jesus's closest confidant betrays him, as on the eve of the crucifixion, Peter denies knowing Jesus three times. Following Jesus's death, Peter spreads Christianity abroad, and while in Rome, tradition holds that in 64 C.E., Nero has Peter crucified upside-down — a request Peter makes so as not to denigrate Jesus's death. His tomb is now encased within St. Peter's Basilica.

Paul (or Saul, as he is first called) is arguably the person most responsible for spreading Christianity throughout the Mediterranean region, on its way to becoming the religion of the Roman Empire. Paul's efforts to convert people to Christianity are all the more remarkable since, when we first meet Paul, he is vigorously attempting to stamp out this movement because he believes that its message contradicts the teachings of the Hebrew Bible.

Then, one day, while Paul is traveling to Damascus to arrest Christians, Jesus appears to him in a blinding flash of light and tells Paul his efforts against Christianity are what contradict the teachings of the Hebrew Bible, because Jesus is God's promised Messiah.

Paul spends the rest of his life spreading the "good news" about Jesus's life and teachings throughout the Roman world, suffering intensely for a movement he was once bent on destroying.