Facing the Consequences of Iodine Deficiency 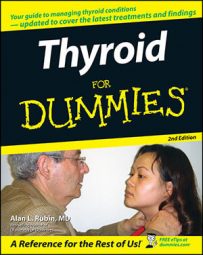 More than one-quarter of the world's population suffers from some level of iodine deficiency disease. That works out to 1.6 billion people. Of these, 655 million have a goiter, an enlargement of the thyroid that can sometimes be debilitating. Twenty-six million of them have brain damage, and 6 million of those 26 million suffer from cretinism; they are so handicapped by their thyroid conditions that they are completely dependent upon those around them to live. Some researchers believe that for each day we delay treating this vast problem, 50,000 infants are born with decreased mental capacity caused by an iodine deficiency.

The reason so many people suffer is that the food they eat or the ground from which that food comes contains little or no iodine. All soil on earth used to contain iodine. However, over hundreds of thousands of years, the iodine has been leached out of the soil in two major areas of the earth: the high mountains and the plains, far from oceans, that were covered by water in the past.

The high mountains were once covered with glaciers. As the glaciers melted, they carried iodine out of the soil, back to the ocean. In the same way, the flooded plains leached iodine from the soil and carried it back to the ocean as the water flowed away. As a result, high mountains and plains far from oceans are the areas where iodine deficiency disease is most often found.

Focusing on the vastness of the problem

If you looked at a map of the world that shows the areas where iodine deficiency disease is most prevalent, you'd see that vast areas of China, Russia, Mexico, South America, and Africa are rife with the disease. Surprisingly, the United States is not spared. At one time, the iodization of salt and the addition of iodine to bread seemed to solve the problem in the U.S. More recently, as shown in a study in the Journal of Clinical Endocrinology and Metabolism in October 1998, Americans have decreased their iodine intake. Nearly 12 percent of those studied had insufficient iodine in their urine. (The urine test is a reliable measurement of daily iodine intake.) This number compares with only 3 percent with insufficient iodine intake 20 years earlier.

Western Europe, also, used to be virtually free from iodine deficiency, but recent studies among Europeans have shown decreases in iodine intake as well.

Paying the price at every life stage

If your body lacks iodine, it can't produce sufficient thyroid hormone. This deficiency has severe consequences at every stage of life.

Even before pregnancy, a lack of T4 hormone has a harmful effect. Women who are hypothyroid have greater difficulties becoming pregnant, and they have more miscarriages and stillbirths than women with normal thyroid function.

A fetus doesn't begin to make thyroid hormone until the 24th week of pregnancy. Until then, it's dependent upon the mother's T4. During this time, the fetal brain is developing, and the entire chain of events that produces a normal brain requires T4 at every stage. If this hormone is lacking, the consequences are severe.

If a fetus is deficient in T4 hormone, its brain triggers an increase in the amount of the enzyme that converts T4 to T3 within the brain. This form of the enzyme is not found in other tissues, so the brain may be protected from hypothyroidism while the rest of the body is not.

The entire body's formation is dependent upon adequate T4. If sufficient hormone is not available, congenital anomalies may occur. The infant may not survive much past birth. If it does, it may not live more than a few years. In this nuclear age, it's important to realize that a thyroid gland that is not making enough thyroid hormone will take up large amounts of iodine from whatever source it can. In the case of a nuclear accident where radioactive iodine is released, a hypothyroid mother will concentrate the iodine and pass it on to her growing fetus. If radioactive iodine does not destroy the fetal thyroid, that thyroid will at least be very prone to develop thyroid cancer.

A new baby deprived of iodine will have a goiter and show signs of hypothyroidism. Depending upon the severity of the lack, the baby may have cretinism. The brain of a newborn continues to develop up to age 2, so providing iodine starting immediately after birth may prevent retardation. A baby lacking in iodine also shows increased susceptibility to radioactive iodine (or any iodine).

Iodine-deficient children often have goiters. They show reduced intelligence and poor motor function, and they may be deaf. Like infants, these children have a tendency to accumulate iodine from any source and are at greater risk in the case of a nuclear accident.

After the iodine-deficient child has grown up, a goiter is often present in an iodine-deficient adult, though not always. He or she is intellectually retarded and may have movement difficulties. This person's thyroid gland is highly susceptible to radioactivity.

As you can see, the costs of iodine deficiency disorder are enormous both for the individual and for society. A village filled with people who suffer from widespread iodine deficiency would not be able to govern itself or provide an economic base to help better the condition of the people, or to take the steps necessary to overcome the problem.