Osteoporosis: How Long Does Bone Take to Heal?

By: Carolyn Riester O'Connor and Sharon Perkins and
Updated: 03-26-2016
From The Book: Osteoporosis For Dummies 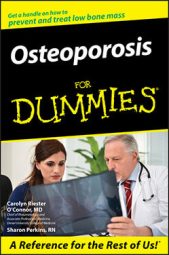 You may not have thought much about osteoporosis — until you've fractured a bone. Exactly how fast the bone heals depends somewhat on the type of bone that's broken.

Bone consists of complicated living tissue of which there are two types, cortical and trabecular. Most bones contain both types of tissue:

If you have a problem with low amounts of vitamin D in your blood or some other problem with vitamin D metabolism, it'll take much longer for your fracture to heal.

Carolyn Riester O'Connor, MD, is certified in bone densitometry and is a fellow of the American College of Rheumatology. Sharon Perkins, RN, is the coauthor of Breastfeeding For Dummies and Fertility For Dummies.