10 Messages for Teens and Young Adults Who Vape

Explore Book Buy On Amazon
Vaping is a relatively new pastime that has become increasingly popular with young people. In the early years, vaping went largely unnoticed and unstudied. But as more and more teens experiment with vaping, there are mounting concerns. We’re concerned, too. And we have some messages for those who are considering trying it out or who have already started to vape. 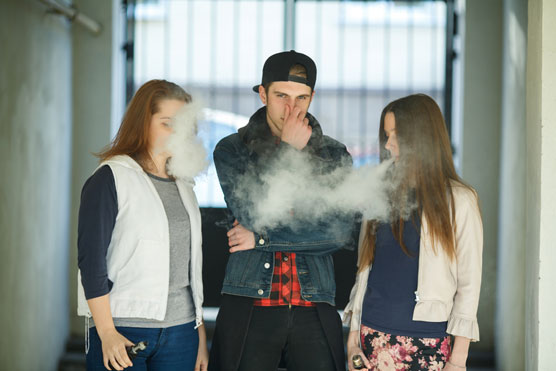 If you’re a parent or caring adult, and you have concerns that a young person in your life may be vaping or thinking about vaping, see if you can get that person to read this article. If all else fails, use these messages as talking points. Keep the communication door open!

We know your peers (and maybe a dude at the vape shop) have told you that vaping is safe. Many people think that. And it’s true that vaping is “probably” quite a bit safer than regular cigarettes that emit burned tobacco smoke.

But that does not make vaping safe. Even the CEO of JUUL recently announced that people who have never smoked or vaped before shouldn’t take up the habit due to the risks involved, which are not yet completely known.

Lungs were meant to breath air — not smoke, not pollution, and not aerosol from your vaping device. Sure, most of those delicious flavors are natural and many are approved by the U.S. Food and Drug Administration (FDA). But unless you’re drinking your e-liquids (and we advise against that, too) those flavorings were approved for ingestion not inhalation. The safety of all possible flavoring ingredients has not been established. And the FDA is now moving to restrict flavors. In the meantime, beware.

Stay Away from Street Products

You can buy fake Rolex watches off the street that look exactly like the real deal to the untrained eye. They’re pretty cheap, too. On the other hand, the gold finish is fake, and the innards are made of cheap materials with questionable reliability.

You can buy e-liquids, vaping devices, and chemicals off the street as well. You can also get vaping paraphernalia at unlicensed shops that move often and escape regulatory oversight; they’re no more reliable than street vendors.

Contaminated street products and their ingredients are the most likely culprits (there may be others) in the recent uptick of serious lung damage (sometimes resulting in death) showing up among teens and young adult vapers. Kids who started out as athletes are ending up in intensive care or the morgue after using some of these products.

We don’t advise you to vape, but if you do, buy your e-liquid and devices at a reputable store — somewhere that has been around a while, has accumulated positive ratings on the Internet, and has no complaints from the Better Business Bureau (BBB). It’s no guarantee, but it’s a start and most likely safer than the street.

Your Brain Is Still Changing

You’re not going to want to hear this, but your brain is still developing and changing as it processes new information and encounters various chemicals and substances. Given that your brain is the only one you’ll ever get, you need to take really good care of it. Substances like nicotine can permanently affect your memory and concentration, as well as raise your future risk of addiction.

Getting Addicted Is No Fun

More bad news: Teens’ brains get addicted faster than the brains of adults. With vaping, a nicotine addiction can happen very quickly. Although loading up on an addictive substance often feels really good at first, the long-term effect isn’t so great. It’s easy for your mind and body to focus obsessively on the need for continual buzzes. That crowds out a lot of brain space that could be used for listening to music, watching movies, hanging out with friends, or even acing your exams in school.

If you’re addicted, you likely have less interest in pursuing other goals and accomplishments in your life. You become consumed with obtaining what you crave, getting that buzz, and then finding a way to repeat the process again. Addiction can cost you a lot of time and money, not to mention your health.

It’s Not Your Parents’ Marijuana

Vape pens are a new way to smoke marijuana that has very little smell and can be extremely discreet. However, the market is virtually unregulated right now, and the safety of these devices is highly questionable. In fact, the vast majority of the emerging lung damage crisis from vaping has been associated with vaping THC. Although marijuana is legal in some states, tetrahydrocannabinol (THC) is still often purchased from black markets, which adds to the concern.

The potency of THC in many vaping devices is many times greater than what your parents may have inhaled back in the day. Experts worry about the unknown effects of long-term use of excessive THC levels. Concerns have also been expressed about the pesticides used by marijuana cultivators, which are known to kill brain cells and increase the risk of some cancers. We’re not trying to scare you — we just want to give you something to think about.

Nicotine Levels May Be Higher than You Think

It’s virtually impossible to calculate how much nicotine your body absorbs from a combustible cigarette or from a vaping device — that is, unless you’re in a medical laboratory with sophisticated equipment. Cigarettes vary in their nicotine levels, and smokers vary in how long they hold a puff in their lungs. Vaping devices and the e-liquids they contain vary greatly in terms of the nicotine levels produced. You can easily be getting more than you think. That possibility is especially true with some of the new pod devices that are particularly popular with young people.

Psychologists have found that the ability to tolerate frustration is one of the most important skills to acquire during adolescence and young adulthood. It’s a great predictor of future earnings, success, and happiness. Unfortunately, the ability to tolerate frustration is likely to be impaired when you become seriously addicted. So, if you want money, success, and happiness, stay away from vaping.

What Would You Tell Your Little Brother or Sister to Do?

We know you most likely have an imperfect relationship with your little brother or sister (if you have one). But, on balance, we bet you’d want what’s best for the kid. Would you advise your little bro or sis to take up vaping? Probably not. Why not? You know exactly why not: unknown risks, addiction potential, money, and more. So, if you wouldn’t advise it for your brother or sister, why are you doing it? By the way, your younger siblings look up to you, and you’re serving as a role model — whether you want to or not.

Choosing What’s Cool rather than What’s Good for You

Teens want to be accepted by their friends. Part of being accepted is doing what the rest of the crowd is doing. Standing up to peer pressure is a struggle that some kids find overwhelming. Many teens succumb and do things like vaping, in order to be cool, knowing deep down that it’s not the right thing to do — maybe not even what they really want to do.

Most adults can understand the temptations of following the crowd. Your parents may not know that you vape. Those devices that look like USB drives are pretty easy to conceal. But you probably know that.

If you want to quit, consider telling your parents about your desire to quit and you may be surprised by how helpful and supportive they are. If not your parents, talk about your concerns with a school counselor, school nurse, or a coach or teacher you trust. Be smart and do what you know is best.

Thinking about the Long-Term Game

At your age, it’s really hard to think about next year, let alone the next decade or two. But use your imagination and consider what you want to look like in the future. Do you see yourself blowing smoke from a vaping device around your future family, your kids, or at your workplace?

By then, what do you think the science will say about the long-term effects of vaping? No problem? Really? Do you truly think that regularly inhaling chemicals won’t cause a few health issues? It’s your call.