The Role of Vitamin D in Protecting against Pancreatic Cancer

Pancreatic cancer generally has a poor prognosis because of its location in relation to other critical organs. Studies suggest that vitamin D may play an important role in fending off pancreatic cancer. The pancreas has two major functions:

Most of the pancreas lies behind the stomach, as shown in the following diagram. Any tumors that grow can’t be felt until they’re so large that the cancer is very advanced. For this reason, pancreatic cancer has a high mortality rate. About 42,500 new cases occur in the United States every year, and 35,250 deaths occur from pancreatic cancer. 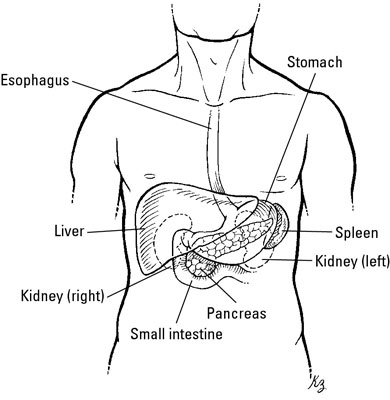 The location of the pancreas.

Other pancreatic cancers arise from the hormone-producing cells of the pancreas, called the islets. These cancers can be silent or they may cause low blood sugar (hypoglycemia) due to an insulin-producing tumor (insulinoma).

Pancreatic cancer has many risk factors, some of which can be avoided and others that can’t. The most important are listed here:

The most common signs and symptoms include the following:

The diagnosis of pancreatic cancer is usually made at a late stage, when a patient complains of pain in the abdomen, has experienced weight loss, and has jaundice. The patient then usually has a computed tomography (CT) scan to find the location of the cancer.

If the tumor is still localized to the pancreas, the first line of treatment is surgical removal of the tumor. Next, chemotherapy is given, but this is usually just to give the patient a few more months to live.

Because pancreatic cancer is usually diagnosed late and the recovery from the disease is rare, some think that prevention is more feasible than treatment. Up to 30 percent of pancreatic cancer may be prevented by stopping smoking.

Some evidence suggests that vitamin D may play an important role in pancreatic cancer. Consider these points:

Although these findings are promising, there are a number of studies showing that high blood levels of vitamin D might be harmful! One study pooled the results of seven other studies and found that serum 25-hydroxyvitamin D levels greater than 40 ng/ml [100 nmol/L] doubled pancreatic cancer risk. Another one saw an even higher risk in smokers.

It’s studies like these that make some vitamin D experts cautious about blanket recommendations to raise vitamin D intake to high levels. If the cancer-preventing effects of calcitriol are real, it may be that the doses currently recommended for bone health are all that’s needed to achieve them.