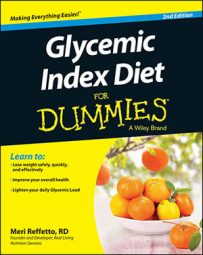 The information here is designed to provide you with some insight into how the glycemic load varies among popular food choices. As you can see, fruits and vegetables typically end up on the low end whereas the more starchy foods, such as potatoes, rice, and pasta, end up on the medium to high end.

Your goal is to pick low- to medium-glycemic foods most of the time.

Notice the different portion sizes and their glycemic load measurement. Some foods are clearly a slam dunk as far as being a healthy choice, but others are a little gray. For example, if you look at spaghetti, you see that it has a medium glycemic load for a portion size of 3/4 of a cup.

Spaghetti is therefore fine to eat in that amount, or you can even lower the glycemic load a little by eating just 1/2 of a cup. But if you go over the 3/4-cup portion size, you’re entering into high-glycemic territory.

If the idea of a portion's size effect on glycemic load still seems confusing, don't get discouraged in your efforts to understand it. After a while you'll get the hang of looking at the glycemic load of a food compared to just its portion size.