Explore Book Buy On Amazon
Coffee is actually a drink with benefits for virtually every part of the human body. Start with the fact that coffee is nutritious. It's brewed from beans, so many of the nutrients that make them a powerhouse show up in your coffee cup.

A single cholesterol-free 6-ounce cup of plain coffee brewed from grounds delivers 12 percent of the magnesium and potassium and 16 percent of the calcium you'd get from a half cup of cooked kidney beans, all for a skinny 2 calories (versus 70 calories for the kidney beans). And while it's true that coffee has none of the protein, dietary fiber, and other nutrients you get with beans, there's more good coffee news from brain boost to good sex.

Coffee lights up your brain

Take a sip of coffee, and its caffeine zips from your mouth through your body to your brain where it blocks adenosine, a natural chemical that slows the transmission of messages from one brain cell to another. With adenosine sidetracked, two other natural brain chemicals, norepinephrine and dopamine, spring into action, firing up nerve cells that enable you to think faster. That's why caffeine makes you alert.

How much coffee a body needs to get this benefit depends on the body in question. In 2014, data from the Coffee and Caffeine Genetics Consortium published in Molecule Psychiatry suggested that genes related to caffeine metabolism make caffeine's effects more "rewarding" for some than for others.

As with all good things, a smart body knows its limits and "modulates" consumption to get the best possible effects. FDA suggests that in general, "moderate" coffee drinking means about 200–300 milligrams caffeine a day, what you might get from about three 8-ounce cups. FDA moderates that moderate advice by suggesting that women stick to no more than two 8-ounce cups a day. However, you know your own body best. If two cups of coffee make you jumpy or irritable, stick to one. If four cups simply make you mellow, enjoy.

Feeling down because it's raining or you just realized you have to lose 5 pounds to fit into your favorite jeans? One cup of coffee will definitely provide the temporary lift you need to make it through the afternoon.

If you're feeling down for days or weeks, check in with your doctor. Although coffee can provide a short-lived lift, it isn't a substitute for effective antidepressant meds or therapy.

According to the American College of Sports medicine, more than 40 years' worth of studies shows that caffeine enhances your exercise endurance, probably by releasing adrenaline into your bloodstream. The adrenaline triggers the release of fatty acids that provide energy early in endurance exercises, such as a marathon, sparing glycogen (the muscle fuel) for later effort.

You may have heard that drinking coffee raises your cholesterol. Not necessarily. The culprit is cafestrol, a natural chemical in coffee that does indeed send cholesterol levels higher. But running your coffee through a paper filter captures and removes the cafestrol. Problem solved.

Coffee lowers your risk of stroke

In 2011, a report in the medical journal Stroke credited women coffee drinkers with a risk of stroke 25 percent lower than women who never lift a cup of java. Many similar studies followed, including one in 2013 in which researchers compared the "beverage habits" of more than 80,000 healthy men and women. This time, the coffee advantage was a 20 percent lower risk of stroke among those who drank at least one cup a day. Researchers credit the effect to caffeine's ability to expand blood vessels and reduce blood clotting.

Green tea has a similar but much less pronounced effect. To get the benefit provided by one daily cup of coffee, you'd have to slurp down four cups of green tea a day.

By 2015, the researchers had upped the protective effects of coffee and green tea, now asserting that one daily coffee (or two cups of green tea) is associated with a whopping 32 percent lower risk of stroke.

Coffee lowers your risk of some cancers

Absolutely no conclusive evidence shows that any one food guarantees protection against cancer, but consuming some foods — including coffee — does appear to be associated with a lower risk of some forms of the disease. In 2015, scientists at the European Prospective Investigation into Cancer and Nutrition Study (EPIC) found a 19 percent lower risk of endometrial cancer among women drinking three cups of coffee a day versus non-coffee drinkers.

Coffee may ward off Type 2 diabetes

In 2014, researchers at the Nurses' Health Study (NHS) found a 20 percent lower risk of Type 2 diabetes among those drinking up to four cups of coffee a day compared with non-coffee drinkers. Add one more cup, and the risk is 30 percent lower.

Frank Hu, the Harvard professor of nutrition and epidemiology who found these figures, still doesn't think there's enough info to say exactly how much coffee will keep Type 2 diabetes at bay, but he definitely considers plain coffee — sorry, no cream or sugar — healthful.

The wake-up power of caffeine lasts for about seven hours, so if drinking coffee makes it hard for you to get to sleep, have your last cup about six or seven hours before you normally head for bed. On the other hand, although nobody quite knows why, some people actually find a cup of coffee right at bedtime relaxing. Go figure.

A 2015 report from The University of Texas Health Science Center in Houston shows that men who consume 85 to 170 milligrams of caffeine a day — about what you get from two to three cups of regular coffee — reduce their risk of erectile dysfunction by 42 percent compared to non-coffee drinkers. As with other benefits from coffee, the mechanism appears to be relaxation of the blood vessels, increasing blood flow and a firm erection. (The only exceptions are men with diabetes.)

Starting in 1995, the National Institutes of Health (NIH) tracked more than 500,000 American men and women for about 12 years. Their findings, published in The New England Journal of Medicine in 2013 showed a clear link between coffee-drinking and healthy longevity. 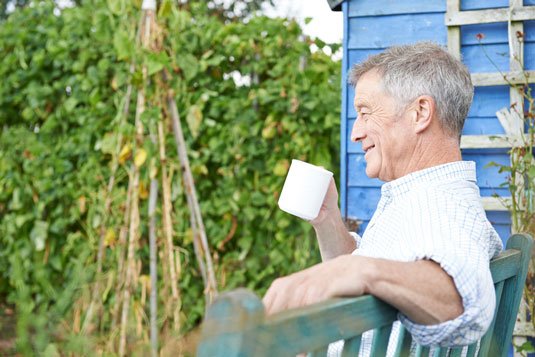 According to Neal Freedman of the NIH National Cancer Institute, "The association was similar for men and women, and tended to get stronger as participants drank more coffee, though the result was very similar for those who drank two or three cups per day and those who drank more than that. The top category we had was six or more cups per day. And by cup, I mean a U.S. 8-ounce cup." Why? Freedman says no one yet knows exactly which of the hundreds of compounds in coffee may be responsible for the health benefits, but he's sure there will be more studies coming.