Rev Up Your Metabolism to Fight Belly Fat 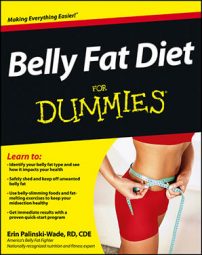 Efficiently metabolizing calories can lead to a healthier body weight and a reduction in belly fat. Metabolism is the process by which the body makes and uses energy (calories) for everything from the cellular absorption of nutrients to running a marathon.

In other words, the better your metabolism, the more calories you burn throughout the day. Because weight loss and body fat loss are dependent on creating a calorie deficit, increasing your metabolism makes losing weight and keeping it off easier.

Metabolism can decline for many reasons, including the following:

The good news is that a decline in metabolism doesn’t have to be permanent. You can increase it and, therefore, the number of calories you burn each day. I show you how in the following sections.

Nosh on foods that fire up your metabolism

Some foods, seasonings, and spices directly boost your metabolism (and therefore promote fat loss and weight reduction). Here are some great belly-burners to aim to eat on a regular basis:

Eat your way to a better metabolism

By making some simple changes to your eating habits and behaviors, you can boost your metabolism (and, therefore, burn more calories every day). Here are a few easy changes you can make: