By: Patricia Raymond and Michelle Beaver and
Updated: 02-17-2022
From The Book: Acid Reflux Diet & Cookbook For Dummies 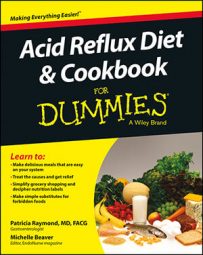 Explore Book Buy On Amazon
There are many opinions out there about how to treat acid reflux. It can get confusing! Particularly confusing is the fact that what triggers one person's reflux may not trigger yours. This Cheat Sheet breaks down the bulk of what you need to know so you can reduce your reflux without getting a headache.

Acid reflux is the result of a malfunctioning lower esophageal sphincter (LES). The LES is a small ring of muscles between the esophagus and stomach. When functioning correctly, it opens to allow food and fluid to pass down into the stomach, and then closes promptly. Acid is not supposed to flow upward — and when it does, that’s reflux.

Reflux can also be contributed to by having a hiatal hernia. There is some evidence that there is a genetic component to reflux. Habits, however, are the main culprit. Being overweight, eating meals that are too large, and eating and drinking the wrong foods can all lead to reflux. Smoking is also a trigger.

The following consumables can lead to reflux:

In short, diet and lifestyle are usually the factors behind reflux. Change them, and you’ll likely change your symptoms.

How to prevent and treat acid reflux

The old adage “an ounce of prevention is worth a pound of cure” certainly applies to acid reflux. In other words, it’s better to prevent acid reflux than to treat it.

When you get acid reflux, if you keep doing whatever gave you the ailment, you’ll keep getting the ailment, and eventually there will be consequences beyond discomfort and pain. Eventually, your throat will become so sensitive that reflux bouts will hurt even more. You could develop anything from a chronic sore throat and cough, to a precancerous condition called Barrett’s esophagus. So, prevent, prevent, prevent.

The best way to prevent acid reflux is with diet and a few lifestyle tips:

If none of these changes prevents reflux, you should still follow a reflux reduction diet, but you’ll also need to visit your doctor. Your doctor may recommend antacids, prescription medications, or surgery.

The differences between acid reflux, heartburn, and GERD

The terms acid reflux, heartburn, and gastroesophageal reflux disease (GERD) are often used interchangeably, but there is a difference among these three digestive disorders:

Acid reflux is dangerous because it’s linked with several serious, life-threatening medical conditions. One of the more serious conditions associated with reflux is esophageal stricture ― a narrowing of the esophagus. This condition can make it difficult to swallow and may require surgery.

Even more serious is Barrett‘s esophagus, a mutation of the cells that line the esophagus. Barrett’s can be a precursor to esophageal cancer. Speaking of esophageal cancer, that’s another potential (though rare) consequence of long-term, serious reflux.

Reflux can lead to inflammation of the esophagus, and chronic, painful coughing and hoarseness. To get rid of these symptoms, you may start popping antacids. An occasional antacid isn’t a problem, but becoming reliant on them is. The chemicals in some antacids can lead to fatigue, loss of appetite, weakness, diarrhea, muscle pain, and swelling.

Another illness that reflux can cause? Aspiration pneumonia — an inflammation of the lungs and bronchial tubes from inhaling gastric contents into the lungs. Anyone can get this condition, but people with reflux are more likely to develop it.

Symptoms of aspiration pneumonia include:

See a doctor immediately if you notice any of these symptoms.

If you have reflux only a few times a year, the worst you’ll suffer will be discomfort and maybe a poor night of rest. But if you get reflux much more often than that, you should see a doctor about it.

Patricia Raymond, MD, FACG, is one of the most respected voices in patient education on digestive health, including acid reflux. Michelle Beaver has served as editor-in-chief or associate editor for magazines that serve surgeons, endoscopic nurses, nephrologists, and primary-care physicians.