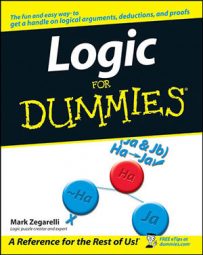 Because deduction rhymes with reduction, you can easily remember that in deduction, you start with a set of possibilities and reduce it until a smaller subset remains.

For example, a murder mystery is an exercise in deduction. Typically, the detective begins with a set of possible suspects — for example, the butler, the maid, the business partner, and the widow. By the end of the story, he or she has reduced this set to only one person — for example, "The victim died in the bathtub but was moved to the bed. But, neither woman could have lifted the body, nor could the butler with his war wound. Therefore, the business partner must have committed the crime."

Induction begins with the same two letters as the word increase, which can help you remember that in induction, you start with a limited number of observations and increase that number by generalizing.

For example, suppose you spend the weekend in a small town and the first five people you meet are friendly, so you inductively conclude the following: "Everybody here is so nice." In other words, you started with a small set of examples and you increased it to include a larger set.

Logic allows you to reason deductively with confidence. In fact, it's tailor-made for sifting through a body of factual statements (premises), ruling out plausible but inaccurate statements (invalid conclusions), and getting to the truth (valid conclusions). For this reason, logic and deduction are intimately connected.

Deduction works especially well in math, where the objects of study are clearly defined and where little or no gray area exists. For example, each of the counting numbers is either even or odd. So, if you want to prove that a number is odd, you can do so by ruling out that the number is divisible by 2.

On the other hand, as apparently useful as induction is, it's logically flawed. Meeting five friendly people — or 10 or 10,000 — is no guarantee that the next one you meet won't be nasty. Meeting 10,000 people doesn't even guarantee that most people in the town are friendly — you may have just met all the nice ones.

Logic, however, is more than just a good strong hunch that a conclusion is correct. The definition of logical validity demands that if your premises are true, the conclusion is also true. Because induction falls short of this standard, it's considered the great white elephant of both science and philosophy: It looks like it may work, but in the end it just takes up a lot of space in the living room.