By: Tracey Wood and
Updated: 03-26-2016
From The Book: Overcoming Dyslexia For Dummies 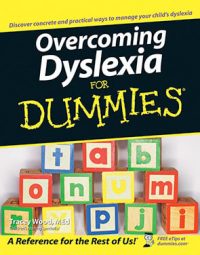 A dyslexic person, although bright in many areas, struggles long-term with written (and sometimes spoken) words. A psychologist can identify that your child is dyslexic by a variety symptoms but you should lookout for warning signs that include the following: