The Spectrum of Codependency

By: Darlene Lancer and
Updated: 12-29-2021
From The Book: Codependency For Dummies

Explore Book Buy On Amazon
Maybe you’re wondering whether you’re codependent. It may be hard to tell at first, because, unless you’re already in recovery, denial is a symptom of codependency. Whether or not you identify as codependent, you can still benefit from alleviating any symptoms you recognize. You will function better in your life. Recovery helps you to be authentic, feel good about yourself, and have more honest, open, and intimate relationships.

Like most things, codependency varies on a scale from minimal to severe. When you’re under stress, symptoms flare. Some individuals show only slight symptoms, while others have all of the typical characteristics Some traits and examples may sound foreign, while you can relate to others. The severity of codependency varies depending on a number of things, such as the following:

If you’re codependent, generally symptoms show up to some extent in all your relationships and in intimate ones to a greater degree. Or codependency may affect your interaction with only one person — a spouse or romantic partner, a parent, sibling, or child, or someone at work.

Codependency may not affect you as much at work if you’ve had effective role models or learned interpersonal skills that help you manage. Maybe you weren’t having a problem until a particular relationship, boss, or work environment triggered you. One explanation may be that the parent has a difficult personality or the child has special needs, and the couple has adjusted to their roles and to one another, but avoids intimacy.

The spectrum of codependency is illustrated here. The horizontal vector shows how opposite codependent personality traits can manifest in a relationship. Individuals may reverse roles. For example, you may be the pursuer in one relationship and a distancer in another, or flip back and forth in the same relationship.

In an alcoholic marriage, the sober spouse may scold and blame the irresponsible, needy alcoholic, who behaves like a victim. Then their roles switch, and the alcoholic dominates and controls his or her partner. Sometimes the spouse who acts needy or “crazy” gets well, and the self-sufficient, invulnerable partner breaks down.

Both the disease and recovery exist on a scale represented by the vertical vector here. Codependent behavior and symptoms improve with recovery, described at the top, but if you don’t take steps to change, they become worse in the late stage, indicated at the bottom. 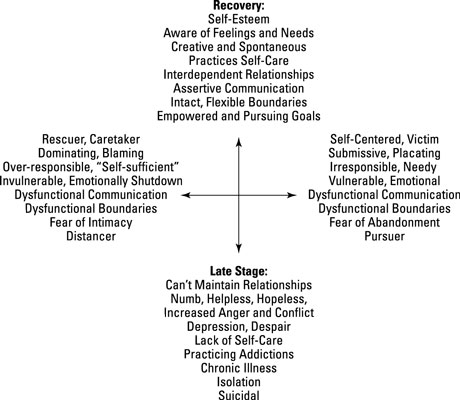 As you get better acquainted with the symptoms and characteristics of codependents, you may see yourself. If you feel overwhelmed by the thought of having codependency, instead focus on the patterns and behaviors you want to change. If you’re committed to change, it really doesn’t matter whether or not you consider yourself a codependent. However, it’s important to realize that codependency won’t get better or go away by itself. Support is essential, because you won’t be able to make permanent changes on your own.

Darlene Lancer, JD, LMFT, is a licensed marriage and family therapist specializing in relationships and codependency. Ms. Lancer has counseled individuals and couples for 28 years and coaches internationally. She's a sought-after speaker to professionals at national conferences and in the media.