By: Darlene Lancer and
Updated: 06-28-2021
From The Book: Codependency For Dummies

Explore Book Buy On Amazon
Many dysfunctional families look healthy on the outside, but the internal dynamics revolve around a family member’s addiction, abuse, illness, or trauma. Other families are dysfunctional because of rigid control or a lack of empathy and acceptance that can cause children to become codependent. The strongest predictor of codependency is having codependent parents.

Codependency usually starts when you feel emotionally abandoned. In response, you repress your feelings, needs, observations, and thoughts. You learn to numb your hurt, distrust your parents, and become self-sufficient. To cope and be accepted, you hide behind a false personality or develop compulsive behaviors to cope.

Dysfunctional families tend to be closed

Dysfunctional families are closed to varying degrees. Some won’t allow different or new ideas to be discussed among members or with outsiders. They may not welcome guests or friendships with those of another race or religion. Remember Archie Bunker of All in the Family? He was autocratic and intolerant of opposing views.

Some families are isolated and don’t interact with the community. Others do, but appearances are everything. The family may be respected in the community but hides the truth. Talking about the family to others is considered disloyal. At bottom are shame and fear of different ways of thinking.

Family problems and crises, such as a member’s absence, illness, or addiction, never get talked about. Parents think that if they act normal and pretend the problem doesn’t exist, maybe it’ll go away. Or children won’t notice or be harmed. However, this pretense makes you doubt your perceptions, because what you see and know aren’t acknowledged by authority figures.

You learn not to question or trust your parents — nor to trust your perceptions, feelings, or yourself, even as an adult. Denial conveys to children that they can’t talk about something frightening — even to each other. Unfortunately, frightened children who share the same bedroom and overhear their parents fighting, nonetheless live in silent fear, because they can’t talk about their pain with each other.

Ask yourself these questions:

Denial breeds secrets. Some families hide a shameful truth for generations — whether it’s addiction, violence, criminal activity, sexual issues, or mental illness. That shame is felt by the children — even when they don’t know the secret. If you do know the secret but can’t ask questions or talk about it, you feel different, damaged, or ashamed.

A genogram is a diagram that charts family relationships, patterns, and secrets. It’s guaranteed to be illuminating. Gather information by interviewing all of your relatives and create a family genogram. The males are shown as squares, the females as circles, and the eldest child is on the left. 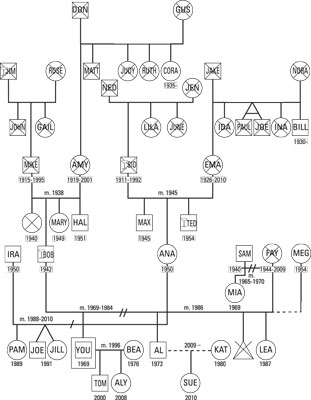 Diagram: Darlene Lancer
In this sample genogram, you were born in 1969, married Bea in 1996, and have a son and daughter. Your parents, Bob and Ana, divorced (“//”) in 1984 when you were 15. Ana married Ira four years later but separated (“/”). Your father, now living with Meg (the broken “– – –” line), is an alcoholic, as was your grandfather, Sid, and great-grandfather, Jim. In 1986, your father married Fay, who died in 2009. From that marriage, you have a half-sister, Lea, born following a miscarriage, and a stepsister Mia, the same age as you. Your other half-siblings are Pam, Joe, and Jill. You’re also an uncle to your brother Al’s daughter, Sue.

A genogram also reveals curious generational patterns. Perhaps you married or had a child at the same age as one of your parents. By creating a genogram, you can find answers to many of your family questions. In this example, Ana’s father, Sid, and brother, Ted, are also alcoholics. As a codependent, she was primed to marry your father.

Ana had twins, as did her grandmother, Nora. Ana’s were fraternal, and Nora’s were identical, indicated by the adjoining bar (“–”). Ana married at 19, like her mother, Ema. Both you and your uncle Max were born the year of both your parents’ marriage, suggesting shotgun weddings. Also notice that both of your grandmas were the eldest of large families, suggesting they were strong women and caretakers.

Look online or make up symbols to indicate mental illness, adoptions, family violence, incarceration, and different types of addiction, including alcoholism, gambling, sex, and eating disorders. You can also track illness and disease, such as depression, addiction, heart disease, diabetes, and cancer. Also ask yourself:

Darlene Lancer, JD, LMFT, is a licensed marriage and family therapist specializing in relationships and codependency. Ms. Lancer has counseled individuals and couples for 28 years and coaches internationally. She's a sought-after speaker to professionals at national conferences and in the media.