An ACT Intervention with a Teenager Experiencing Anxiety and Paranoia

By: Freddy Jackson Brown and Duncan Gillard and Steven C. Hayes and
Updated: 03-26-2016
From The Book: Acceptance and Commitment Therapy For Dummies

Acceptance and Commitment Therapy For Dummies 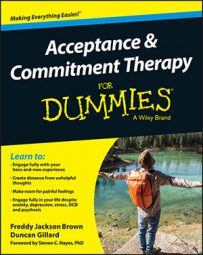 Following an initial meeting with Marco and his parents, Duncan agreed to carry out a brief Acceptance Commitment Therapy (ACT) intervention that focused on defusion and setting value-based goals.

When Duncan met Marco, he was 19 years old. His documented case history indicated that he was experiencing panic attacks and associated paranoid thoughts.

In the initial meeting, Marco described two events that tended to precede his sense of anxiety:

He said that these events were followed by thoughts that the person outside was coming to take him away or commit a burglary in his home. When he talked about his experiences before and during panic attacks, Marco described feeling hot, panicky, dizzy and nauseous. He could feel his heart banging in his chest.

When he experienced these panic attacks alone in the house, his typical response was to phone the police. Unsurprisingly, after 20 or so such phone calls, the police officers were concerned about this inefficient use of their time.

During one particularly powerful experiential exercise, Duncan and Marco talked about the difference between words as sounds and the learned meanings associated with words.

They considered how words come to have personal meaning as a result of the context in which they're used. They explored the word chocolate as an example and listed the various attributes associated with it: brown; sweet; tasty; sugary; an indulgence and so on. Duncan then invited Marco to join him in saying the word chocolate over and over again, for about 30 seconds, and asked him to take note of what happened as they did so.

Afterwards, Marco described how the word gradually lost its meaning during the course of the exercise and ultimately became just a sound. Marco had defused from the literal meaning of the word chocolate.

Duncan then invited Marco to work through the exercise again, but this time using the words 'they're coming to get me' – the thought that preceded his panic attacks.

Marco practised this exercise regularly at home and as a result this phrase lost some of its potency. He was also able to recognise this thought when it emerged in the circumstances that usually led to his phoning the police (people walking past the house; the phone ringing). Rather than panicking, he acknowledged that he was having a troublesome thought – 'they're coming to get me' – accepted it even though he found it uncomfortable, and chose to ignore its literal content.

Duncan also helped Marco to identify his values and set some value-based SMART goals. They considered the sort of person he'd like to be and how such a person would behave. After three sessions, Marco was able to respond differently to the situations that prompted his anxiety.

He'd also identified some small steps he could take to create the life he wanted, which included doing a few minutes of mindfulness every day and playing tennis twice a week at the local sports centre.

Freddy Jackson Brown is a clinical psychologist and has worked in the NHS for over 20 years. Duncan Gillard is a Senior Educational Psychologist and Acceptance and Commitment Therapy practitioner. He provides psychological services to children, young people, families and school-based professionals.