Visual- and Quantitative-Information Questions on the Praxis Reading Test

Explore Book Buy On Amazon
The most unusual thing about the Praxis Core reading test (don’t worry — we said unusual, not difficult) is that it includes what are referred to as visual- and quantitative-information questions, which is the Praxis’s fancy term for questions about charts and graphs. Most reading and writing tests don’t do this.

There aren’t a ton of visual- and quantitative-information questions on the Praxis exam. There may only be two or three. Depending on the exam you happen to take, you may see three questions all about the same graph, or you may see one or two questions each about a couple of different graphs. But every point helps, so this section tells you about these questions.

If charts and graphs make you nervous because they seem more like math and science stuff than reading and writing stuff, the first step for you is to think about visual- and numeric-representation questions differently. The fact that visual- and quantitative-information questions are on the Praxis reading portion of the exam isn’t a mistake or the result of someone’s bizarre whim — it proves that, regardless of appearances, these questions really are reading-comprehension questions at heart.

A graph — or any kind of picture — can be thought of as a visual depiction of information that could also be presented verbally. Just as you could either compose the sentence “A horse jumps over a fence” or you could draw a picture of a horse jumping over a fence to represent the same idea, a bar graph, line graph, pie chart, or any other type of chart or graph can be thought of as verbal information presented in pictorial form.

So, relax. The visual- and quantitative-information questions are reading-comprehension questions. They’re just different.

Graphs on the Reading Comprehension Test

The most common type of a graph is a line graph. A line graph represents the relationship between two variables: an independent variable plotted along the x (horizontal) axis and a dependent variable (a variable that depends on the first one) plotted along the y (vertical) axis. The line running through the quadrant formed by their intersection is what you look at to figure out what value for one variable is paired with what value for the other. So, say you had a line graph that plotted the relationship between “hours spent studying” and “score on the Praxis reading test” (as though everyone who studied for the same amount of time got the exact same score, which would certainly be nice …). The “hours spent studying” would be plotted with hatch marks along the horizontal axis, and the various possible “scores on the Praxis reading test” would be plotted along the vertical axis, because this is the variable that depends on the other one. If you want to know the score someone who studied for, say, five hours, would get, you’d just proceed upward from the five-hour hatch mark on the bottom until you hit the line representing the actual data, then turn and go left until you hit the corresponding score on the side of the graph. 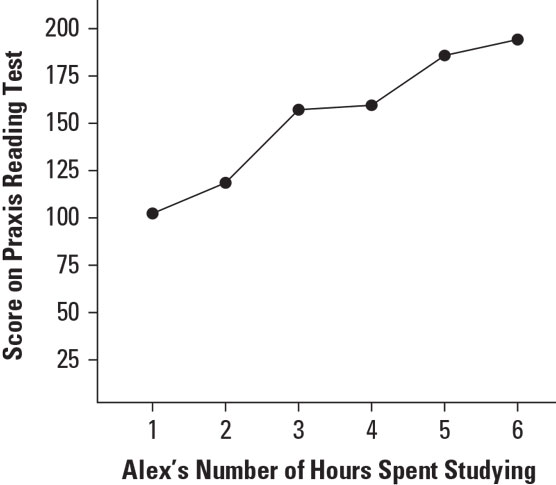 Another type of graph commonly found in Praxis visual- and quantitative-information questions is a bar graph. Rather than depicting the relationship between an independent and a dependent variable like a line graph does, a bar graph represents how different categories stack up against each other with respect to some particular idea. For example, you might use a bar graph to compare the number of World Series won by various baseball teams. The names of all the teams would be plotted along the horizontal with a bar above each name, and the heights of the bars would indicate the number of World Series each team had won, with the vertical axis of the graph hatch-marked to indicate how many championships were represented by a given bar height. The bar representing the New York Yankees would be very high (some might say unfairly high); the bars representing the St. Louis Cardinals, Oakland Athletics, and Boston Red Sox would be lower, but still respectably high; and the San Diego Padres and Texas Rangers wouldn’t have bars over their names at all (at least not as of this writing, since neither team has yet won a World Series). 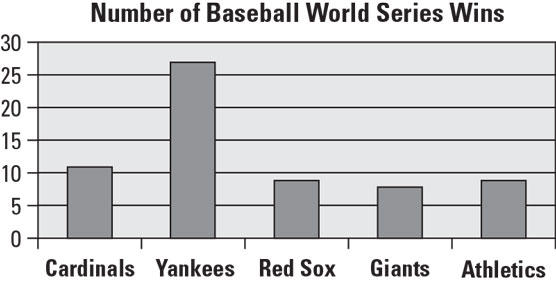 You could also plot that same information with another common type of graph called a pie chart. The difference between a pie chart and a bar graph is that a pie chart represents percentages of a total, so it looks like a circle with different-sized triangle-like pieces marked off inside it (hence its name). On a World Series pie chart, the Yankees’ slice of the pie would be nearly one-fourth of the whole pie, as there have been 115 World Series and the Yankees have won 27 of them. The Cardinals’ slice would be about one-tenth of the pie (11 World Series victories out of 115). Because a pie graph represents percentages of a total, the teams that have never won a World Series wouldn’t appear on the pie at all. 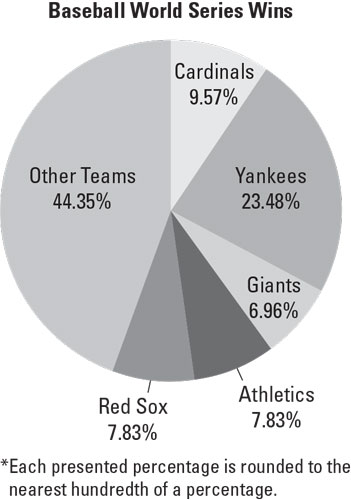 But really, there’s no sense in trying to memorize every type of chart or graph in the world. There are far too many ways to represent data visually for it to be in your interest to try and guess which types of charts or graphs will make an appearance when you take the exam. The best approach is to identify key words from the question, connect them to information represented in the graph, and then analyze the answer choices. 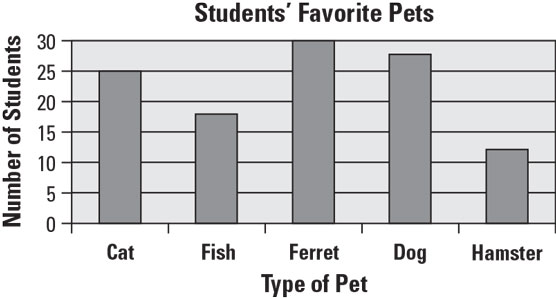 Based on the preceding graph, the biggest drop-off in popularity between consecutively ranked pets is between

The correct answer is Choice (B). In order to answer this question correctly, you have to think about the pets in order of most popular to least popular — that is, rank them consecutively as the question states. The biggest drop-off in popularity between consecutively ranked pets by a fairly wide margin is between cats (the second-most-popular pet, chosen by 25 students) and fish (the third most popular pet, chosen by about 17 or 18 students), with a drop-off of 7 or 8 votes. Note that the bar graph doesn’t allow you to judge perfectly how many students voted for fish, but that doesn’t matter. Whether fish got 17 or 18 votes, the biggest drop-off in popularity is still between cats and fish.