How to Narrow Down Answer Choices on the Praxis Math Test

The correct answer is Choice (B). You can find the answer by solving the equation. 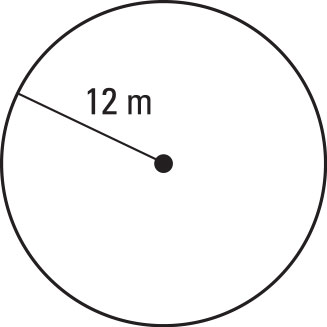 The radius of the preceding circle is 12 meters. What is the circumference of the circle?

The correct answer is Choice (A). The formula for the circumference of a circle is C = 2πr. Substituting 12 m for r, you get 2π(12 m) = 24π m. You can eliminate Choice (C) right away because neither π nor a decimal number, which would result from multiplying 12 by a decimal approximation of π, is in the answer. Another reason Choice (C) can be eliminated is because the radius of a circle can’t possibly equal the circle’s circumference. Multiplying by 2π can never be the same as multiplying by 1; 2π is not equal to 1, and it never will be, as far as we know. Choice (B) can be eliminated because multiplying by π is not the same as multiplying by 2π. You can also eliminate Choice (E) because the number that precedes π in a representation of a circumference can’t be less than its radius unless different units are used. Multiplying a positive number by 2π has to result in an increase. The three eliminations leave you with Choices (A) and (D), and that puts you closer to the right answer. Choice (D) is incorrect because it is the area of the circle, not the circumference, except with m instead of m2. If the unit were m2, you could eliminate it right away because circumference is not properly expressed in square units.

Avoid the most common wrong answers

Other choices to watch out for and be ready to eliminate are the ones that result from the most common calculation mistakes. Memorizing the rules for all the math topics you’ll face on the Praxis is important for avoiding these common mistakes.

For geometry questions, some of the most common mistakes involve getting formulas confused, such as area and circumference. If you have a question about the area or circumference of a circle, you may have an answer choice that gives you the number involved in a measure about which you’re not being asked. Be ready to avoid such answers.

Also remember the difference between the interior angle sums of triangles and quadrilaterals. Choices may be the result of using the wrong number. Confusion between supplementary and complementary angles is common, and so is confusion between formulas for surface area and volume. Forgetting the formulas for the volume of pyramids and cones also happens often.

As for algebra and number and quantity questions, losing track of the fact that a number is negative is one of the most common mistakes. The distributive property is very frequently used improperly. Remember that the term right before the parentheses is supposed to be multiplied by every term in the parentheses, not just the first one. 5(x + 3) is equal to 5x + 15, not 5x + 3.

For statistics and probability questions, be careful about confusing mean, median, and mode. People often forget that the median of a set of data can be found only when the numbers are in order. When using scientific notation, be careful about the direction in which you move decimals. Numbers resulting from wrong decimal directions may be in the choices.

Which of the following has the same value as 35.937 percent?

What is the median of the preceding set of data?

The correct answer is Choice (A). When the numbers are in order, the middle number is 28. It is therefore the median. Interestingly, Choice (A) also happens to be the range of the set of data. Hopefully, you didn’t reach the correct answer because you mistook median for range. Sometimes mistakes lead to the right answers, but we don’t advise counting on that method. Choice (B) is the middle number in the set of data as it is presented, but not when the data is in order. Choice (C) is the mode and the lowest number. Choice (D) is the mean. Choice (E) is just one of the numbers in the set of data.