By: Ron Woldoff and Geraldine Woods and
Updated: 10-27-2021
From The Book: SAT For Dummies 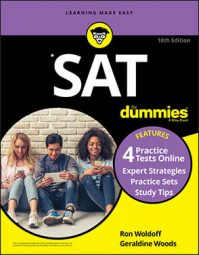 Explore Book Buy On Amazon
There are two math tests on the SAT, back to back. The first math test features 20 questions for 25 minutes, with no calculator allowed. The second math test has 38 questions for 55 minutes, and you are allowed to use a calculator. Other than that, the two tests are basically the same. One thing to note is that the questions tend to start out at a low level of difficulty, which increases as you progress through the test.

Furthermore, if you know how to approach an SAT math question, then it takes less than a minute to answer. This means that if you know what to do, you can answer all of the questions in the SAT math tests easily and without rushing. And this leads to the first two bits of wisdom:

Here are more bits of wisdom (also known as Math Test Strategies) along those same lines:

Formulas on the SAT math tests

The first page of each math test has a set of formulas to help you solve the problems. By the time you’re on the second page of the test, you’ll probably forget it’s there — almost everyone does — but these formulas, shown, are still good to know.

The SAT gives you these formulas.

Of the 58 math test questions, most are good ol' multiple choice, but 13 (five in the first math test and eight in the second) ask you to provide your own answers and bubble them into a grid. These questions are known as grid-ins. This figure shows a sample blank grid-in.

The grid-in problems are normal math questions but with certain rules: 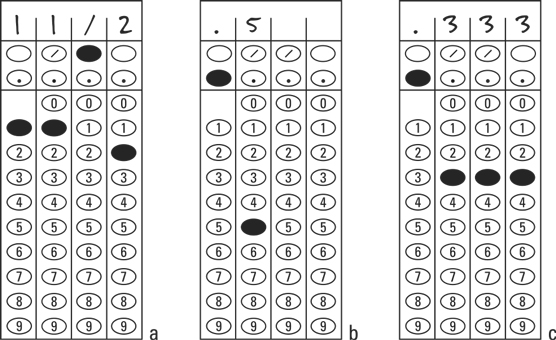 Don’t worry if you get more than one possible answer. Some grid-in questions have several possible right answers. (Usually those problems read something like, “what is one possible value of . . .”) Just pick one answer and you’re set.

Get familiar with the math tests

The SAT throws the occasional curveball question in its math tests. There may be some unusual topic just on the edge or outside the scope of SAT Math. These are few and far between, but if you encounter one, you know what to do: Circle it, take a guess, and come back to it later. If you know how to answer most of the math questions, you can answer them quickly and have time left over to focus on the harder questions. That means you.

What are those math topics? Glad you asked. So, there you are. You now know the secrets of the SAT math tests. Nice! Note that whether a group of questions is about a quarter or half of the Math Test questions, or whether certain topics are more common than others, varies from exam to exam. The preceding assessments, along with the estimated priority of each math topic, are based on the review of countless SATs with students. Each exam is different, and yours may not have a quarter of this question type or half of that one. But it’ll be close.

Also, unlike the Reading Test and Writing and Language Test, where you learn strategies to take on 11 questions at a time, the math test strategies focus on one question at a time.

Ron Woldoff founded National Test Prep to help students reach their goals on college entrance exams. He created the programs and curricula for these tests from scratch, and he has taught his own test prep programs at various Arizona high schools, colleges, and universities.