Explore Book Buy On Amazon
The rectangular survey system, often referred to as the government survey system, is based on a system of lines that form rectangles and squares throughout the United States. The first sets of lines respectively are called principal meridians, which run north and south, and baselines, which run east and west. The principal meridians and baselines are based respectively on lines of longitude and latitude.

You’re likely to see at least a few questions on the real estate license exams on calculating the area of part of a section, and you’ll also see questions about terminology and some of the measurements that the rectangular survey system uses. You may even see a question or two about the numbering system used for sections. Because the rectangular or government survey system was instituted when the United States was a new country, it was used to describe most of the land west of the original 13 colonies, so most of you are likely to see some questions about this system.

Longitude and latitude are imaginary lines that divide the earth through the north and south poles (longitude) and run parallel with the equator (latitude). Principal meridians, baselines, and where they intersect (cross each other) are used as the basis for formulating property descriptions in this system. They are the starting points for describing a property’s boundaries. The following is a list of helpful terms:

Because of the curvature of the earth, the lines in the government survey system are only theoretically straight. Imagine trying to draw straight lines on a rubber ball. Although the lines start out the same distance apart, they get closer together as you get near one or the other end of the ball.

Remember that although these correction lines and guide meridians are the way the government deals with the issue of the earth’s curvature, it isn’t the way the government survey system describes land. In reality, because of this earth curvature issue, many sections and townships vary from their exact area measurements. A system of fractional sections and government lots are parts of standard practice to account for these discrepancies.

So how does the system describe land? Using principal meridians and baselines as points of reference, land areas are divided by two kinds of lines, township lines and range lines. Township lines, which run east and west, parallel to baselines, are horizontal parallel lines that form township tiers.

Now, the way it really works is for this page to be filled with the lines going up and down and right to left so that you have many townships. The township is the basic unit of measurement in the rectangular survey system. The area created by the intersection of a township line and a range line is a township. The townships are consecutively numbered by their location within the intersection of multiple range lines and township lines. The boundary of each township is 6 miles long, so a township contains 36 square miles and is described as being 6 miles square. These townships are not the same as political subdivisions.

Each township is further divided into 36 sections of one square mile each, or 640 acres, by horizontal and vertical section lines. Sections also are numbered consecutively. Section 1 within any township is always located at the upper right or northeast corner of the township. The numbering then moves from right to left across that first upper tier. The numbering continues directly beneath the sixth section, except that it progresses from left to right on the second tier. The numbering changes directions in the third tier from right to left. In other words, after section number 6, it drops down to 7 on the next tier then goes left to right to number 12. Then the numbering drops down to 13 and goes right to left again and so forth: 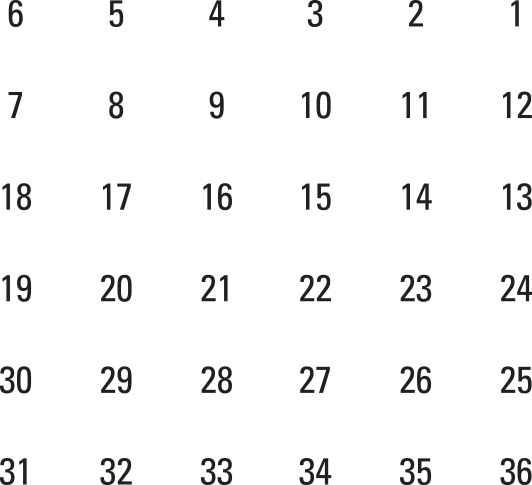 Each section of 640 acres can be divided into halves and quarters called, get this, half sections and quarter sections. These divisions mean just that. For instance, a quarter section always contains 160 acres, or a fourth of the total 640 acres in a section. Specific directional references are needed in the actual description to locate a particular piece of property, but for finding out how large a particular piece of property is, only the fractions matter. 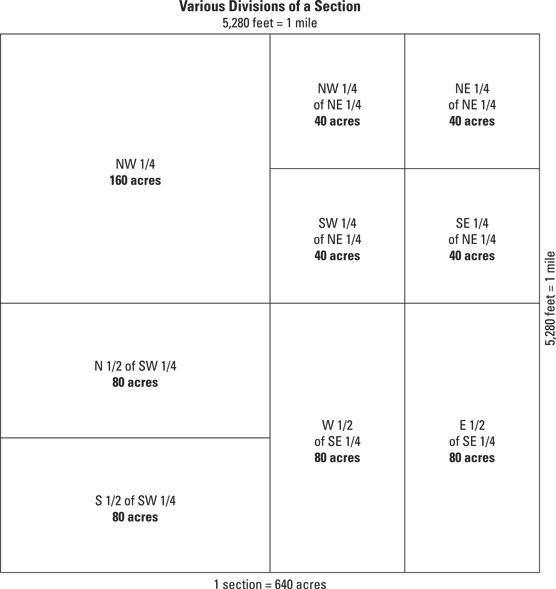 Sections can be divided in a variety of ways, including quarters and smaller sections.

Each half or quarter section can be further subdivided into halves and quarters. So, you can refer to the south (S) 1/2 of the northwest (NW) 1/4 of a section in a township, for example. (The figure below shows a variety of divisions in a quarter section.)

Figuring out the size of a piece of property, which sometimes is called a parcel, is simple, if you keep in mind that you’re always dealing with a section of 640 acres. Putting the above description into words is half of a quarter section. Doing the math, it’s 1/2 × 1/4 × 640 = 80 acres. 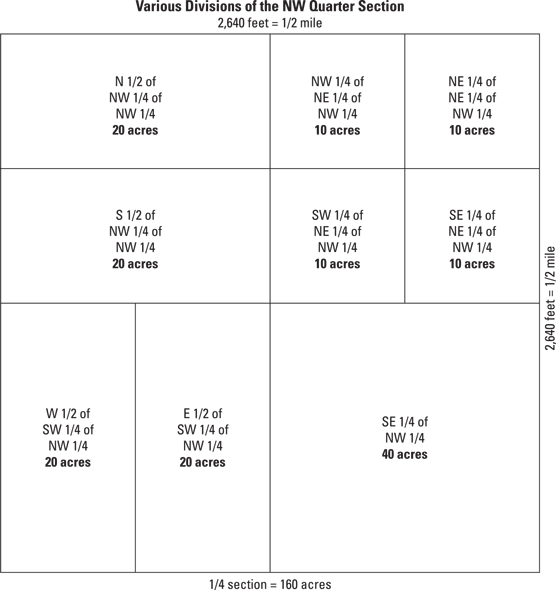 A quarter section can be split into smaller parts.

The description probably would include the state and county in which the property is located and use abbreviations. So, in the example above, Township 4 South would be T4S. Whenever properties have irregular boundaries, the land may be further described using one of the two other systems described in this section.