By: Jane R. Burstein and Carolyn C. Wheater and LTC Richard Dahoney and
Updated: 03-26-2016
From The Book: Officer Candidate Tests For Dummies 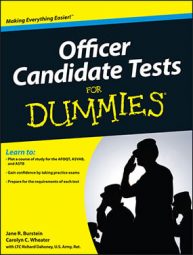 Your preparation for taking an officer candidate test largely depends on which test you’re planning to take. All branches of the U.S. military use the Armed Services Vocational Aptitude Battery (ASVAB) for enlistment, but applicants for officer training take different tests for different branches of the military. Here’s a rundown of the tests that each branch uses:

The ASVAB is a placement test that allows the military to place enlistees on career paths that they’re best suited for based on their knowledge and skills in eight distinct areas. The following table presents the subtests for these eight areas. General Technical (GT) refers to a composite score of Verbal Expression (Word Knowledge + Paragraph Comprehension) + Arithmetic Reasoning.

The AFOQT consists of 12 subtests, including a Self-Description Inventory that doesn’t really qualify as a bona fide test. The following table lists the 12 subtests including the number of questions and time allotted for each. All examinees must complete all subtests regardless of the program they want to pursue.

The Navy, Marine Corps, and Coast Guard all use the ASTB as one measure of readiness for applicants to the officer aviation program. These branches of the military use the battery to predict performance and attrition. The ASTB measures math knowledge and skills, the ability to understand written material, mechanical knowledge, spatial perception, and knowledge of fundamental aviation and nautical concepts. The entire battery consists of the six subtests listed in the following table.

Jane R. Burstein has been a private SAT tutor since 1985. Carolyn Wheater teaches math at The Nightingale-Bamford School in New York, New York. LTC Richard Dahoney, U.S. Army, Ret., is the principal author of disbursing policy guidance for the U.S. Department of Defense.