Because you know that space is expanding, you can run the video of the universe backward in time in your head. When you do this, you realize that the universe had to be much smaller than it is now. As the matter in the universe gets compressed into a smaller and smaller amount of space, the laws of thermodynamics (which govern the flow of heat) tell you that the matter had to be incredibly hot and dense.

In opposition to the big bang theory, Fred Hoyle proposed an alternative theory, called the steady state theory. In this theory, new particles were continually being created. As space expanded, these new particles were created fast enough that the overall mass density of the universe remained constant.

To understand the reason for such a theory, you have to realize that few physicists thought it likely that a dense ball of matter could spring into existence out of nowhere, violating the law of conservation of mass (or conservation of mass-energy). That matter had to come from somewhere.

In Hoyle’s view, if matter could be created out of nothing one time, then why not have it happen all the time?

Though Hoyle’s steady state theory would ultimately fail, in trying to prove it Hoyle would prove himself worthy in the eyes of history by developing a theory about where the dense atoms of our universe come from.

One of the major converts to the big bang theory was physicist George Gamow, who realized that if the theory were true, a residual trace of cosmic microwave background radiation (CMBR) would be spread throughout the universe. Attempts to find this radiation failed for many years, until an unexpected problem in 1965 accidentally detected it.

As other scientists were attempting to test Gamow's theory, Arno Penzias and Robert Wilson at New Jersey’s Bell Laboratory Holmdell Horn Radio Telescope were picking up this horrible static when they attempted to detect radio signals in space. No matter where they pointed the silly thing, they kept getting the same static. The two men even cleaned bird droppings off the telescope, but to no avail. In fact, the static got worse on the unobstructed telescope. Penzias and Wilson had discovered the CMBR, and earned the Nobel Prize in Physics in 1978.

Forty more years of research has only confirmed the big bang theory, most recently in the picture of the CMBR obtained by the Wilkinson Microwave Anisotropy Probe (WMAP) satellite. The picture obtained by this satellite, shown in the following figure, is like a baby picture of the universe when it was just 380,000 years old (13.7 billion years ago). Before this, the universe was dense enough to be opaque, so no light can be used to look further back than that. 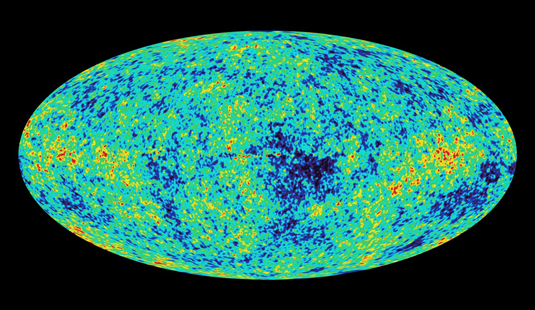 Understanding where the chemical elements came from

Both George Gamow and Fred Hoyle, while differing strongly on the big bang theory, were the key figures in determining the process of stellar nucleosynthesis, in which atoms are made inside of stars. Gamow theorized that elements were created by the heat of the big bang. Hoyle showed that the heavier elements were actually created by the intense heat of stars and supernovas.

Gamow’s original theory was that as the intense heat of the expanding universe cooled, the lightest element, hydrogen, was formed. The energy at this time was still enough to cause hydrogen molecules to interact, perhaps fusing into helium atoms. Estimates show that nearly 75 percent of the visible universe is made up of hydrogen and 25 percent is helium, with the rest of the elements on the periodic table making up only trace amounts on the scale of the entire universe.

This proved to be good, because Gamow couldn’t figure out how to cook up many of those heavier elements in the big bang. Hoyle tackled the problem, assuming that if he could make all the elements in stars, then the big bang theory would fail. Hoyle’s work on stellar nucleosynthesis was published in 1957.

In Hoyle’s nucleosynthesis method, helium and hydrogen gather inside of stars and undergo nuclear fusion. Even this, however, isn’t hot enough to make atoms more massive than iron. These heavier elements — zinc, copper, uranium, and many others — are created when massive stars go through their deaths and explode in giant supernovas. These supernovas produce enough energy to fuse the protons together into the heavy atomic nucleus.

The elements are then blown out into space by the supernova blast, drifting as clouds of stellar dust. Some of this stellar dust eventually falls together under the influence of gravity to form planets, such as our Earth.