Einstein’s theory of special relativity has had far-reaching implications, but it has left open certain questions that string theory hopes to answer. It has altered our understanding of time and space. It provides a theoretical framework that tells us how gravity works,

Einstein’s theory of special relativity created a fundamental link between space and time. The universe can be viewed as having three space dimensions — up/down, left/right, forward/backward — and one time dimension. This 4-dimensional space is referred to as the space-time continuum.

String theory introduces many more space dimensions, so grasping how the dimensions in relativity work is a crucial starting point to understanding some of the confusing aspects of string theory.

Following the bouncing beam of light

The reason for this space-time link comes from applying the principles of relativity and the speed of light very carefully. The speed of light is the distance light travels divided by the time it takes to travel this path, and (according to Einstein’s second principle) all observers must agree on this speed.

Sometimes, though, different observers disagree on the distance a light beam has traveled, depending on how they’re moving through space. This means that to get the same speed those observers must disagree about the time the light beam travels the given distance.

You can picture this for yourself by understanding the thought experiment depicted in this figure. Imagine that you’re on a spaceship and holding a laser so it shoots a beam of light directly up, striking a mirror you’ve placed on the ceiling. The light beam then comes back down and strikes a detector. 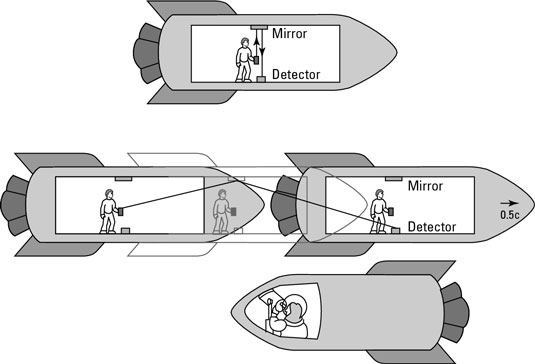 However, the spaceship is traveling at a constant speed of half the speed of light (0.5c, as physicists would write it). According to Einstein, this makes no difference to you — you can’t even tell that you’re moving. However, if astronaut Amber were spying on you, as in the bottom of the figure, it would be a different story.

This means that the time the beam takes to go from the laser to the mirror to the detector must also be different for you and Amber so that you both agree on the speed of light.

This phenomenon is known as time dilation, where the time on a ship moving very quickly appears to pass slower than on Earth. In some ways this aspect of relativity can be used to allow time travel. In fact, it allows the only form of time travel that scientists know for sure is physically possible.

As strange as it seems, this example (and many others) demonstrates that in Einstein’s theory of relativity, space and time are intimately linked together. If you apply Lorentz transformation equations, they work out so that the speed of light is perfectly consistent for both observers.

This strange behavior of space and time is only evident when you’re traveling close to the speed of light, so no one had ever observed it before. Experiments carried out since Einstein’s discovery have confirmed that it’s true — time and space are perceived differently, in precisely the way Einstein described, for objects moving near the speed of light.

Einstein’s work had shown the connection between space and time. In fact, his theory of special relativity allows the universe to be shown as a 4-dimensional model — three space dimensions and one time dimension. In this model, any object’s path through the universe can be described by its worldline through the four dimensions.

One of the elements of this work is the Minkowski (an old professor of Einstein's) diagram, which shows the path of an object through space-time. It shows an object on a graph, where one axis is space (all three dimensions are treated as one dimension for simplicity) and the other axis is time.

As an object moves through the universe, its sequence of positions represents a line or curve on the graph, depending on how it travels. This path is called the object’s worldline, as shown in the figure. In string theory, the idea of a worldline becomes expanded to include the motion of strings, into objects called worldsheets. 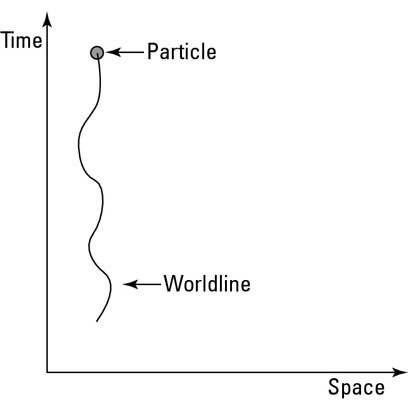