Without quantum physics, string theory could not exist. Here is a look at how quantum theory allows objects to act as both particles and waves. The experiment that proved that light acts like a wave was the double slit experiment.

It showed a beam of light passing through two slits in a barrier, resulting in light and dark interference bands on a screen. This sort of interference is a hallmark of wave behavior, meaning that light had to be in the form of waves.

These interference patterns in light had been observed in Isaac Newton’s time, in the work of Francesco Maria Grimaldi. These experiments were vastly improved upon by the young experimenter Thomas Young in 1802.

For the experiment to work, the light passing through the two slits needed to have the same wavelength. Today, you can accomplish this with lasers, but they weren’t available in Young’s day, so he came up with an ingenious way to get a single wavelength. He created a single slit and let light pass through that, and then that light went through two slits.

Because the light passing through the two slits came from the same source, they were in phase with each other, and the experiment worked. This experimental setup is shown in this figure.

As you can see in the figure, the end result is a series of bright and dark bands on the final screen. This comes from the interference of the light waves, shown in this figure. 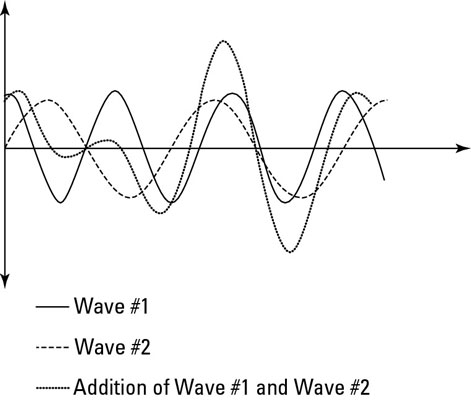 This dual behavior was the problem facing Einstein’s photon theory of light, because though the photon had a wavelength, according to Einstein, it was still a particle! How could a particle possibly have a wavelength? Conceptually, it made no real sense, until a young Frenchman offered a resolution to the situation.

In 1923, Frenchman Louis de Broglie proposed a bold new theory: Particles of matter also had wavelengths and could behave as waves, just as photons did